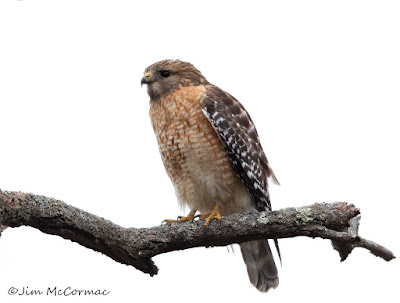 A gorgeous adult red-shouldered hawk scans for prey from a prominent perch. I photographed this animal last Thursday in a very suburbanized area of Columbus, Ohio.

Upon arrival at a postage-stamp natural area not far from my house, about the first bird that I detected was a red-shouldered hawk. Its strident screams couldn't be missed. An instant later, it flew in with a big branch, and led me right to its nest site. The nest isn't complete, and it may be a false start, but I hope the birds keep on with construction and use it as the nest is in a great place to discreetly watch the birds' progress.

Shortly thereafter, its mate flew in and the pair promptly copulated. Branches and other factors conspired to keep me from getting a good shot of that activity, but I tried. 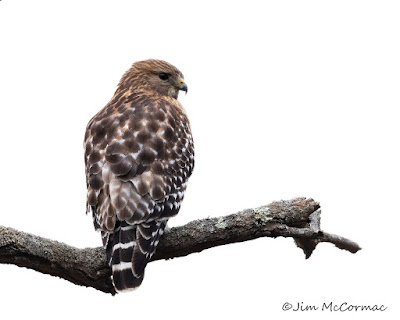 The red-shouldered hawk population in Ohio and surrounding regions has been on the upswing for some time. This is a forest raptor, and as our woodlands have matured, so has favorable red-shouldered hawk habitat. Their increase has been especially notable in urban and suburban areas. Many of the neighborhoods in which I see them around Columbus now have numerous trees that are near climax stage. The effect is that of an urban forest, and in spite of all the people, houses, and traffic, the hawks have moved in.

No one should complain about having this species around. Very few raptors rival a red-shouldered hawk for showiness. In my view, their presence adds much to a neighborhood, and besides, they're fun to watch. In warmer seasons, red-shouldered hawks take lots of snakes and its always interesting to watch them rise from a dive with a wriggling reptile. I'll try and keep tabs on this pair, and see if they successfully nest at this site.

PHOTOGRAPHIC NOTE: The day that I took these photos was a typical white sky winter day. The bird in the images did cooperate nicely by hunting from a perfectly exposed perch, not far off. Red-shouldered hawks often can be quite tame, and as long as the observer is quiet they'll tolerate interlopers fairly well. Anyway, with that dastardly white sky as a backdrop, I had to GREATLY increase exposure compensation, to +2.7 EV (nearly three stops). Even then, the images were still somewhat underexposed, and I had to brighten them a bit more in post-processing. The shots were made with the Canon 5D IV and 800mm f/5.6 lens, at f/5.6, 1/320, and ISO 800, in manual mode. As often is the case, ISO drove much of my settings. I really don't like going higher than 800 if possible. As the lens was wide open at f/5.6, I had nowhere to go there. I also knew I needed all that positive exposure compensation - backing that down would have reduced the need for light. But I'm not into adding huge amounts of exposure correction in post-processing as I think it leads to poorer image quality. Thus, I dialed back the shutter speed to keep the ISO in my desired range. Even though that 800mm lens is a tank, by using good tripod-mounted stabilization techniques, it's amazing how slow a shutter speed one can use and still get a sharp image.