A wacky experiment in mega-magnification 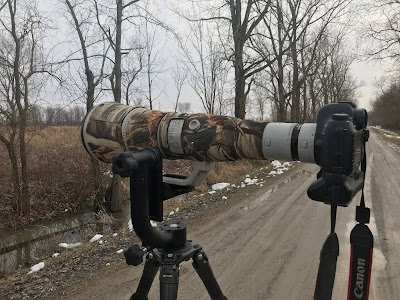 A friend (I don't want to say who so as to avoid giving any hint about this location, but I am very grateful!) recently tipped me to a great horned owl nest, and as it was near a site that I was going to anyway, I stopped by for a peek. As it turns out, the owl was incubating atop an old raptor nest and was fairly visible. But a long ways away! I measured the distance from where my camera rig, above, sits to the owl nest using Google Earth. A whopping 665 feet, or well over two football fields!

Great horned owls using platform nests like this should not be approached. Owls atop such relatively exposed nests tend to be very skittish, and will likely flush even when the interloper is still a long ways off. But in this case, the road and place that I parked was far outside the owl's discomfort zone.

I decided to try an experiment. The rig above, which is securely mounted on a Gitzo tripod and Wimberly head, is the Canon 5D IV and Canon's stellar 800mm f/5.6 lens. Sandwiched between lens and camera are the Canon 2x III teleconverter and 1.4x teleconverter, linked by a 12mm extension tube (the teleconverters will not directly connect). The end result: a 2240mm lens! That gave me the oomph to reach out to that owl nest, but given all the layers of glass that I was shooting through, I didn't think the results would be very good.

And they're not, but they do provide documentary images. Also, two things decidedly not in my favor were overcast skies, and gusts of 15-20 mph. The results would certainly be better on a calm, bright day. 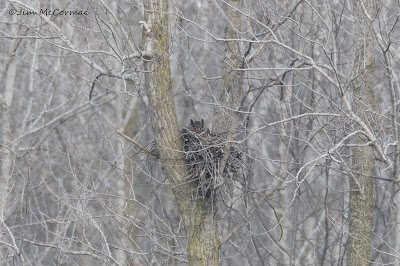 Here's the uncropped owl photo. From 665 feet away. To maximum sharpness, I shot in Live View, which prevents any mirror slap, and used 10-second delay, so there would be no operator-caused movement. I also removed the enormous lens hood, which reduces wind shake, and held the camera strap in a way that it wouldn't blow or cause camera movement (to lazy to remove it).

With those teleconverters, the base aperture is reduced to f/16, which is what I shot at. I used 1/500 shutter speed, as that's about the slowest that I thought I could get away with. Exposure compensation was +0.3. These settings spiked the ISO to 6400 - way past my comfort zone, but there was nothing to be done about it. Also, the teleconverters eliminate auto focus, so focusing must be done manually. 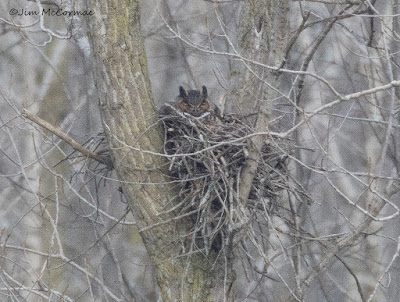 Here's the same image as above, but cropped about 50%. Neither image is art, to be sure, but they do identify the subject. And the subject probably scarcely noticed me. So, I learned that this complicated and quite expensive technique will work, but you'll probably never get truly superb images. It's more for documentation.

ADVICE? If you want to take bad long range photos such as this, save a ton of money and buy one of those inexpensive super-zoom point & shoot cameras :-)

Email ThisBlogThis!Share to TwitterShare to FacebookShare to Pinterest
Labels: canon

If I was able to see this sight I would certainly be happy with such a picture. Your rigging looks like it is about to blow up. ha...

Hi Lisa, yes, it was quite a linkage of stuff, to be sure!