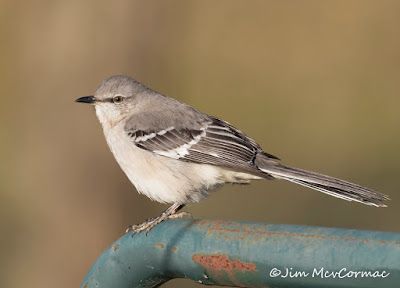 Note: This column is a bit dated. What with all that's been going on, it's been impossible to produce much new material, or put stuff out that was already in the hopper.

With more than 350 Dispatch columns under my belt, I’ve covered many facets of Ohio’s extraordinary natural history. Birds are a large, conspicuous part of our world and I write more avian columns than on any other subject.

Occasionally I realize I’ve neglected some common, interesting feathered topic. Such was the case on a recent snowy day in Hocking County. While surveying birds for the annual Hocking Hills Christmas Bird Count, our team ran across a particularly audacious northern mockingbird.

No shrinking violet, the mockingbird was teed up atop a robust multiflora rose shrub. The thorny thicket’s branches were heavily beset with rose hips, and the bird was defending its cache against all comers.

His primary antagonists were a large flock of eastern bluebirds that loitered nearby. Also smitten with vitamin-rich rose hips, the bluebirds would attempt occasional raids. The mocker was having none of it and quickly drove off his competitors.

Mockingbirds are famed for their aggression. When I was a kid, we had a big black cat who was tough as nails. “Inky” was famed for combating other cats, dogs, or anything else that crossed his path. The only thing we ever saw intimidate him was the local mockingbird. When the bird spotted Inky in the backyard (before we knew cats shouldn’t be outdoors), the one-sided battle was on. The bird would swoop and scold, sending a thoroughly cowed Inky scrambling for cover.

Few birds are more aptly named than the mockingbird. Both sexes sing, and their repertoire largely consists of mimicking sounds they hear. This predilection is defined in the bird’s scientific name: Mimus polyglottos (mimic of many voices). A bird can retain about 150 song types at any given time, and their skill in aping other sounds is remarkable.

My local mockingbird perfectly reproduces nearly all the songbirds he hears: cardinals, robins, bluebirds, flickers and many others. More interesting is his ability to reproduce mechanical sounds such as fire-truck sirens and the backup beeps of garbage trucks. Why mockingbirds mimic is unknown.

Largely a southern species, in spite of the “northern” in its name (it’s the northernmost of four closely related species), the mockingbird seems to be expanding northward. Ohio is near the northern limits of its range, and the species probably didn’t colonize the state until the mid-1800s. They expanded northward throughout the 20th century and continue their march north.

Suburbia often provides suitable habitat for mockers: dense shrubbery, open spaces, scattered trees and plenty of berry bushes. They’re pretty common in Columbus and the vicinity, and many readers are within earshot of one.

The mockingbird’s varied song is pleasing, and trying to identify the various sources of its mimicry is fun. But woe to the listener in close proximity to an unmated male. These bachelors often sing throughout the night. I once had one that loudly sang from my chimney top, serenading the neighborhood throughout the wee hours. This bird sometimes reminded me of the title of Harper Lee’s famous book, “To Kill a Mockingbird.”