Recently, I had a rare opportunity to descend into the depths of the remarkable Ohio Caverns with only two other people, one of which was an exceptionally knowledgeable guide named Karen. She works for the Ohio Caverns operation, and they kindly permitted me access to make photos for an upcoming piece that I'm writing about the caverns.

I'll post that article here after it comes out, but for now will share some subterranean highlights, each briefly captioned. This cavern is easily the most spectacular in Ohio, filled as it is with scores of beautiful geological features. The rocks, in many areas, are painted in exceptionally brightly hues, hence the tag of "America's Most Colorful Caverns". I'd highly encourage a visit; Ohio Caverns is open every day of the year excepting Christmas and Thanksgiving, and is located in Logan County, not far from Bellefontaine. It's an easy enough place to access and traverse, and tours last about an hour. Try for Karen as your guide if you make it. Complete details on Ohio Caverns RIGHT HERE.

PHOTOGRAPHY NOTES: I don't have much in the way of cave photography experience, but tried my best and learned a lot in the course of this excursion. All images were made from a tripod, with very long exposures. I only made a total of eleven images, but each was a bit of a production and took some time. All were shot with the Canon 5D IV and nearly all with the Canon 16-35mm f/4 or Canon 14mm f/2.8 lenses. For the "Old Town Pump" shot I used the Canon 100mm f/2.8 macro lens. All but the latter image are HDR (High Dynamic Range) composites derived from five bracketed shots, mostly made at about one-stop intervals. General settings were ISO 100 or 200 and f/16. I see now at least some of my mistakes and look forward to honing skills with other future subterranean shoots.

ADDITIONAL NOTE: I was fortunate in that circumstances allowed for tripod photography and the time to work out various shots. Tripods are not allowed on regular tours, as they're too cumbersome and time would not permit for lengthy shoots. That said, non-tripod mounted cameras are allowed and pretty good images can be captured with such. Artfully placed subtle LED lighting provides adequate light to work with. 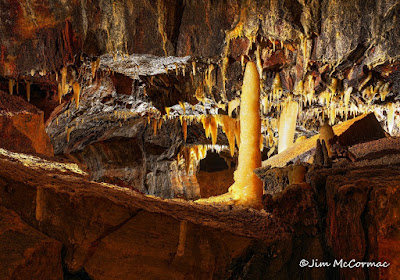 Parts of Ohio Caverns are awash with stunning stalagmites and stalactites. Here, a huge stalagmite arises from the cavern floor, and scores of stalactites hang from the ceiling. 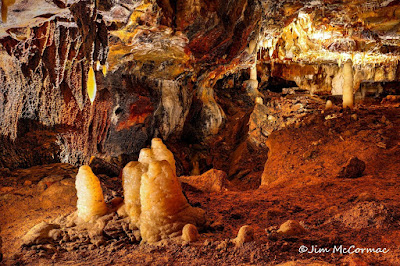 In some areas, the walls are stippled with curious rust formations, as seen in the upper left corner of this image, the result of exceptional iron concentrations. A quintet of sturdy stalagmites is in the foreground, and an oddly-shaped stalactite hangs in front of the rust formations. 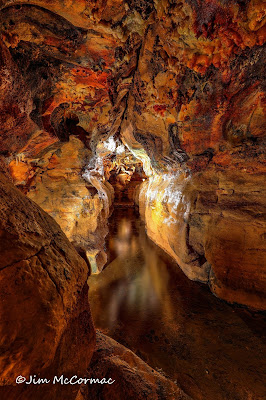 An underground pool is a prominent feature in one spot, and can be viewed from either end. The rocks are especially colorful in this locale. 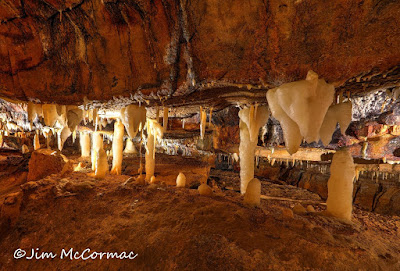 In places, stalactites and stalagmites join and fuse; such structures are called columns or pillars. The part of the cavern seen here is rich in "soda straws" - small thin hollow stalactites. 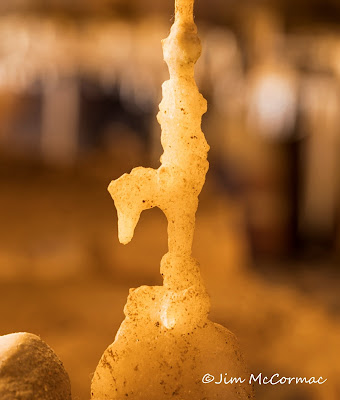 Occasionally soda straws become clogged and the water which forms them is forced out the sides, creating strange formations known as helactites. This is the most famous of Ohio Caverns' numerous helactites, the "Old Town Pump". 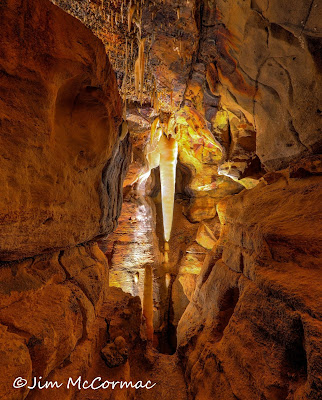 A jaw-dropping stalactite if there ever was one, the famed "Crystal King". Located at the end of a short spur passage, the King hangs like a work of art. Which it is, and a priceless one at that. It's estimated that this amazing stalactite began to form around 200,000 years ago, about the time that Homo sapiens diverged from common ancestors. The Crystal King measures about five feet in length, and is estimated to weigh around 400 pounds.