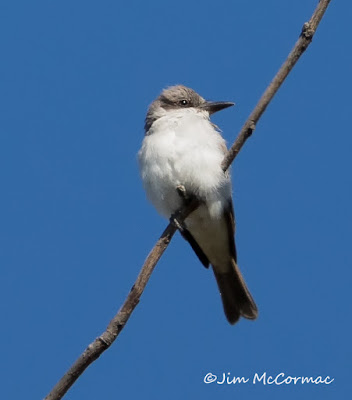 October was a notable month for Ohio birders. Nothing exhilarates the binocular-toting set like a major rarity. Last month brought not one, but two mega-rare birds.

On Oct. 17, Jeff Peters — fairly new to birding — was chasing a flock of sparrows through rough brush in a Clark County park. A quick learner, Peters already has advanced to identifying the little brown birds. He was looking for either Nelson’s or Le Conte’s sparrow in the flock, both of which are unusual here and most likely in late fall.

Peter’s sparrow chase brought him into proximity to a bird he didn’t recognize. Quickly suspecting it to be a flycatcher — any species but eastern phoebe would be notable in mid-October — he took some photos. The sparrows were quickly forgotten as Peters realized he had found something very unusual.

Peters had documented Ohio’s first record of a gray kingbird, and the birding communication networks lit up like a forest fire. Within an hour, other birders arrived and during the next week hundreds more visited. Oct. 24 marked the bird’s last day, but by then nearly everyone who wanted to view the chunky thick-billed flycatcher had done so.


Gray kingbirds nest throughout the Caribbean and northern South America, and are rare but regular nesters in the southeastern states from Mississippi to South Carolina. Only in south Florida, the Keys especially, do they become common. It’s possible that Hurricane Michael pushed the bird northward.

The gray kingbird sighting overlapped with another major rarity. A Richland County homeowner glanced out her kitchen window and spotted an unfamiliar thrushlike bird standing on a nearby woodpile. The family was called in, books were consulted, and they realized a northern wheatear was gracing their farm.

The wheatear was found Oct. 22 and remained for a few days. The homeowners — who wish to remain anonymous — kept a visitor’s log, and probably several hundred birders signed in. Their generosity in allowing access to the farm was much appreciated.

The first Ohio record of northern wheatear dates to January 1988. I was fortunate enough to see that bird, which frequented the frigid environs of Lake Erie in Ottawa County. In the intervening years, four others have been found, including this most recent sighting.

Northern wheatears are bluebird-sized songbirds that breed in far northerly climes around the globe. In North America, there are two distinct populations. One occurs in northwestern Canada and Alaska; the other in northeastern Canada, Greenland and Iceland.

Upon departing their boreal nesting grounds, wheatears embark on one of the most stupefying migrations of any North American songbird. The eastern population — presumably where the Ohio vagrants originate — fly east, crossing the Atlantic Ocean. The 23-gram birds eventually make their way to western Africa where they winter.

It’s only speculation that wayward wheatears originate from the closest breeding population. For all we know, it’s the Alaskan/western Canada birds that turn up here. Those birds normally head west through Asia and the Middle East, also ending up in Africa. But these powerful flyers, if disoriented, could probably end up in Ohio.

The gray kingbird brings Ohio’s official bird checklist to 434 species. As one or two new species are added each year, the list will keep growing. 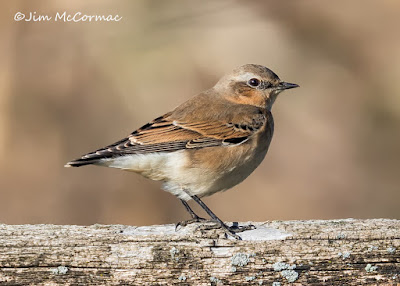 Great article in Sunday's Dispatch about these birds. Has anyone seen Red Breasted Nuthatches in Columbus OH? I have spotted a pair at my feeder 3 times in the last week. I live on the west side close to the 70 Hilliard Rome exit.

Thanks! Yes, lots of red-breasted nuthatches around this fall