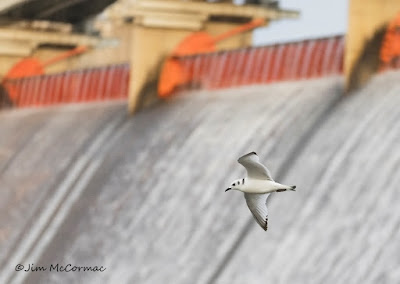 Waters cascading over Hoover Reservoir form the backdrop for a soaring juvenile kittiwake.

Conferences, speaking and other stuff had kept me from triggering a camera shutter for far too long, until a brief window this morning. So I ran up to commune with the now-famous black-legged kittiwake that has been frequenting the tailwaters below Hoover Dam, only a short drive away. These pelagic gulls are a rarity in Ohio, and there have only been a few Franklin County records. This one is a juvenile, with its ornate patterning. I think there has only been one confirmed record of an adult in Ohio, but we get a handful of wayward juveniles every fall/early winter, usually along Lake Erie.

This bird has been present since November 10, I believe, and has delighted throngs of onlookers. Black-legged kittiwakes are abundant, with a total population of nearly 3 million birds, but few of them make it to the midwestern U.S. In North America, virtually all of them winter at sea, in both the Atlantic and Pacific. The Hoover bird is quite cooperative, often winging by observers at very close range. Today was a typical late fall Ohio white sky day - what I would have given for blue skies and golden light! - but even so, it was possible to capture a bit of the beauty of this young kittiwake. 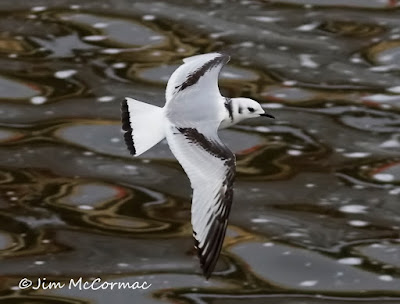