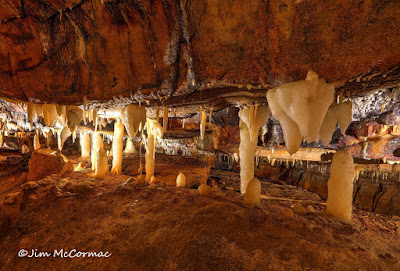 Visitors to Ohio Caverns will find stalactites, stalagmites and calcium tubes among the many natural underground wonders/Jim McCormac

In 1896, prospectors struck gold in the remote Yukon Territory of Canada. Word slowly trickled out and, by the following year, fortune-seekers were pouring west. July 17, 1897 marks the beginning of the Klondike Gold Rush.

One month later,a boy named Robert Noffsinger struck a different kind of gold in Logan County, Ohio. He worked as a farmhand for a landowner named Abraham Reams, and they had been perplexed by the rapid disappearance of floodwaters from a low-lying depression.

Noffsinger dug into the drying pit, and encountered a large fissure in the underlying limestone. Boldly squeezing into the crevice, he popped into a labyrinth of subterranean passages. He became a spelunker into what would become known as Ohio Caverns, Ohio’s gold standard for caverns.

The landowner recognized an opportunity and, within a few weeks, began charging admission to tour the subterranean spectacle. For the next 25 years, numerous gawkers crawled through the passable corridors.

A watershed moment in cavern conservation occurred in 1922, when the cavern was sold to Allen and Ira Smith of Dayton. Prior to their ownership, irreversible damage had been done to the small part of the cave that was accessible. Souvenir-seekers plundered priceless stalactites and stalagmites, and defaced cavern walls with graffiti.

Possessed of an uncommon awareness of speleological preservation, especially for the times, the Smiths launched a plan to conserve the cavern and safely conduct visitors through its wonders.

A crew spent three years digging gravel and muck from previously inaccessible passages, taking pains to avoid damaging various formations. When all was done, more than 3 miles of tunnels were unearthed. In 1925, the Smith brothers rebranded the cavern as Ohio Caverns, and opened the area to the public.

Ohio Caverns remains in the Smith Family to this day, and their dedication to its conservation is admirable. Because of the family’s efforts, visitors can see a breathtaking subsurface —Shangri-La — that must be seen to be believed.

I recently traveled to the rolling hills near West Liberty to visit the caverns for the first time in many years. Led by an extremely knowledgeable guide, Karen, we entered the cave through a thick steel door, hustled down a flight of sixty steps, and entered the cave.

My senses were soon overwhelmed. Fields of ivory stalactites hung, tusklike, from expansive chambers. Delicate hollow tubes of calcite known as “Soda Straws” are interspersed among the stalactites, providing artistic punctuation. Thick stalagmites grew from the floors, as if opalescent spears had been shot up from below.

A tagline for Ohio Caverns — “America’s Most Colorful Caverns” — is very fitting. It’s as if a troglodytic artist daubed the rocks from a palette of ocher, sienna, rust and gold, creating cave art on an epic scale.

Before long, we came to the fabled “Crystal King”, a monstrous stalactite measuring 5 feet long and weighing an estimated 400 pounds. Its formation began about 200,000 years ago, and the King is near the cave’s deepest point, about 100 feet below the surface.

On we went, marveling at Fantasy Land, Crystal Sea, Palace of the Gods, and the Jewel Room. Understated LED lighting effectively illuminates the cavern and its geological oddities, and ample footpaths make traversing the cave easy enough. There is also a loop accessible to visitors with limited mobility.

For more information about Ohio Caverns, visit www.ohiocaverns.com or call 937-465-4017. 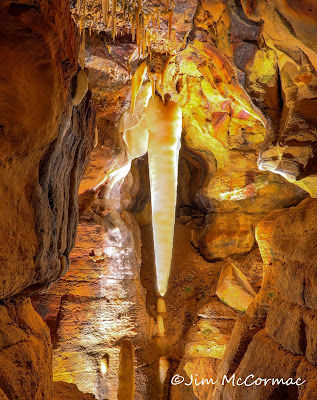