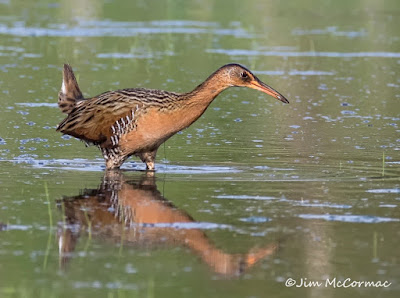 In May 29, 1810, in Kentucky, the great naturalist and birdman John James Audubon encountered a large marsh bird unfamiliar to him. He dubbed it the “fresh water marsh hen,” which would later be formally named the king rail.
In Audubon’s day, the king rail was a common to locally abundant bird over much of the eastern U.S.
John Bachman, a contemporary of Audubon’s, wrote: “Wherever there are extensive marshes ... I have found so many as 20 pairs breeding within a space having a diameter of 30 yards.”
King rails were common nesters in much of northern and western Ohio into the 1930s. Buckeye Lake, 20 miles east of Columbus, once harbored many breeding king rails. The marshy verges of the old canal feeder lake remained wild into the mid-1900s, and the lake was often visited by Milton Trautman.
Trautman was Ohio’s John James Audubon, chronicling bird life for much of the 20th century. He found the rails to be common nesters at Buckeye Lake, and such also was the case in the large marshes buffering Lake Erie.
In most Ohio counties, king rails were the most common of our three widespread nesting rail species, the sora and Virginia rail being the other two.
Rampant wetland destruction became too much for Rallus elegans, and the king of the cattails began to decline rapidly. Today, it is one of Ohio’s scarcest nesting birds and is among Ohio’s endangered species.
Data reported in the Second Atlas of Breeding Birds in Ohio (2016) suggest that perhaps 140 king rails occur in the state each breeding season. I suspect that’s highly optimistic and the population is probably far fewer.
King rails were recorded at only 27 sites in 12 counties during the six years of Ohio’s breeding bird atlas (2006-2011). The decline is widespread: King rail is listed as endangered or threatened in 12 states.
The decline of the king rail is indeed a loss for nature enthusiasts. These big, chickenlike birds enliven a marsh with their vociferous grunting squawks and metallic ticking notes. Somewhat more extroverted than other rails, the big kings sometimes forage in plain sight. The slightest perturbance is apt to send them darting back into dense marsh vegetation.
On May 13, Gabby Amrhein located a king rail at the Glass Farm on the outskirts of Yellow Springs. The bird frequents a small, marshy pond and often offers extraordinary views. Word quickly spread among birders, and the rail fast became Greene County’s most famous avian newsmaker.
I visited on May 17 and almost instantly found the bird strutting about the marshy shallows. Before long, numerous people appeared to admire the showy brownish-red bird with the oversized bill. In total, many dozens of birders have visited the Glass Farm to bask in the king’s presence.
The loss of Audubon’s freshwater marsh hen is a conservation tragedy. It is also a clear environmental omen. About 90 percent of Ohio’s wetlands have disappeared since European settlement, victims of agriculture and other development.
Most wetland-dependent birds have become rarer; the king rail is just one particularly charismatic example of these declines. Restoration of wetlands should be a conservation priority for Ohioans.
Naturalist Jim McCormac writes a column for The Dispatch on the first, third and fifth Sundays of the month. He also writes about nature at www.jimmccormac.blogspot.com.