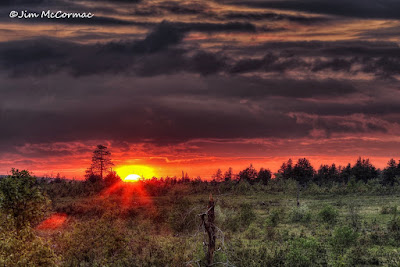 A flaming sunset colors the Jack Pine Plains of northern Michigan's Presque Isle County. Kirtland's warblers, among many other avian species, sang Taps while I made this photo.

Another set of Michigan natural history forays is in the books. This was the 9th year in a row that I've led excursions from NettieBay Lodge, and as always we saw LOTS OF STUFF. For the most part, we don't leave sprawling Presque Isle County, which is in the northeast corner of the lower peninsula. The biodiversity is staggering, as the county includes the shores of Lake Huron, sandy jack pine plains, boreal forests, glacial lakes, fens and bogs, and much more. Birds abound, and between the two groups this year, we probably found about 150 species. But there's much more - floral and faunal diversity is incredible, and we try to look at it all.

While scouting about on my own after the last group departed this year, I found a wonderful road that winds through the jack pine plains, not far from the lodge. There were booming common nighthawks displaying at close range, numerous whip-poor-wills calling from the sandy roadbed, American woodcocks doing aerial courtship displays, a pair of snowshoe hares along the road, and more. We'll add this as an evening foray next year, along with tested hotspots.

If you are interested, please contact Mark or Jackie at NettieBay Lodge, RIGHT HERE. We limit each group to eight people, in order that everyone has the best chance of seeing everything we find.

Following are a few more photos from this year (scroll back to recent posts for more from the latest Michigan trips). 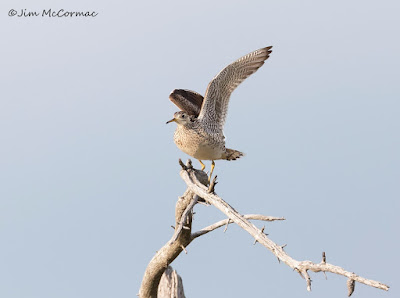 We usually spend the better part of a day in the Jack Pine Plains. While numerous Kirtland's warblers are the undisputed stars, there is so much more. Here' an upland sandpiper alights atop a gnarled jack pine skeleton. The sandpipers are not uncommon and usually don't disappoint.

Where we are, the jack pine habitat is very actively managed, and we see everything from brand new plantings to old-growth pine forests. It's a great immersion into the fascinating ecology of jack pine-dominated habitats, and the many interesting animals that occupy them. 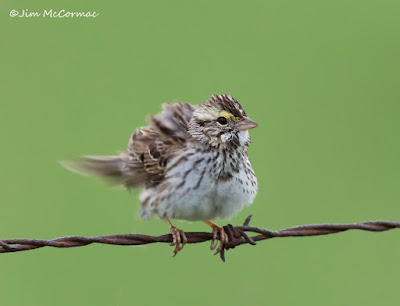 A Savannah sparrow gives a quick shimmy between singing its breezy trills. This part of Michigan is a regular Sparrowpalooza, with as many as thirteen species possible. Especially noteworthy are breeding clay-colored, Lincoln's, and vesper sparrows. 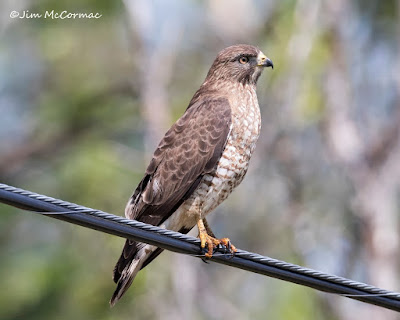 Forest-dwelling broad-winged hawks are common, and often quite tame. In addition to local breeders, we sometimes catch large numbers of migrants along Lake Huron. One magical morning this year, we saw 80 or so broad-wings go over, along with numerous turkey vultures, and several bald eagles and other raptor species. 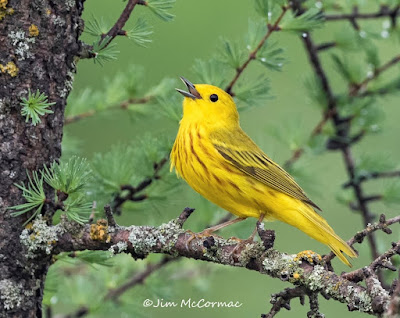 While yellow warblers may be common, a singing male in a dewy tamarack takes on an especially showy look. Warblers abound. There are about 20 locally breeding species, and northbound migrants can add another five or so species to the list. 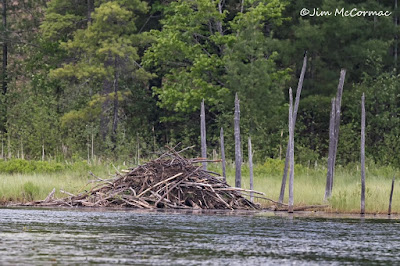 We usually do pretty well with mammals. This is a gargantuan beaver lodge along the Ocqueoc River, which we saw on one of our pontoon boat excursions. Badger is a possibility, as is porcupine, thirteen-lined ground squirrel, elk, northern flying squirrel, and more. 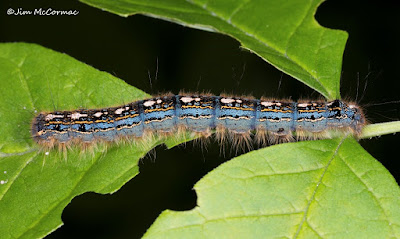 Bug are not always ignored, either. And there are many. This is a forest tent caterpillar, Malacosoma disstria, and especially fetching larva. 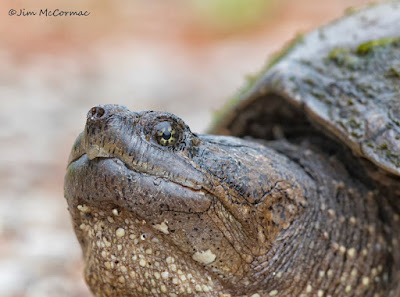 Amphibians and reptiles also abound, and this animal would fall into the latter category, of course. We saw this huge female snapping turtle as she ambled overland, no doubt looking for a good place to dig a nest and deposit eggs. The much scarcer Blanding's turtle is also in the region, and we sometimes see those. 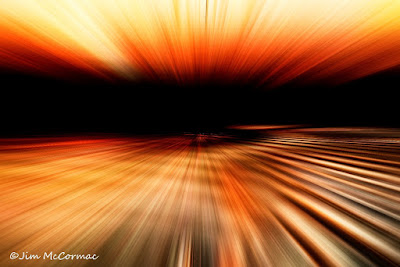 Lake Nettie at sunset, artistic photographic liberties unapologetically taken. Thanks to everyone who came up this year, and I will hope to see you in northern Michigan next year!