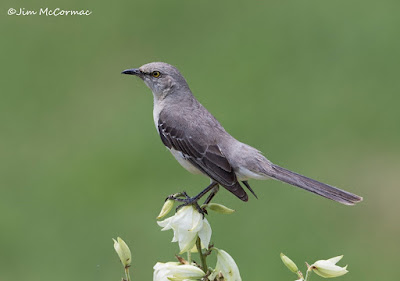 A northern mockingbird, seemingly pleased as punch with its ability to mimic kestrels, blue grosbeaks, titmice, cardinals and all manner of other voices, tees up on the flowers of a yucca. He was performing his act in little Sandy Spring Cemetery in southernmost Adams County, Ohio, within sight of the Ohio River.

I was there last weekend not primarily to photograph showboat mockingbirds, but to take part in a seminar on Ohio River sand terraces, put on by the Cincinnati Museum Center's Edge of Appalachia operation and held at the always interesting Edge of Appalachia Preserve. Big thanks to Chris Bedel, preserve director, for including me. My fellow presenter and trip leader was Matt Purtill, an archaeologist and geomorphologist. Matt is an expert on the formation of these "dunes", and full of insight about the Paleo-Indians who first colonized this region. I learned tons from Matt. 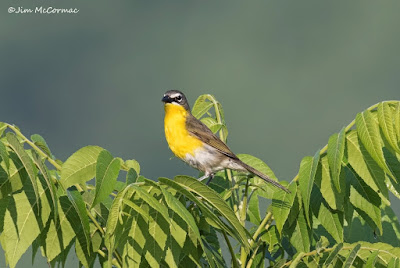 Anyway, this part of Adams County and adjacent Shawnee State Forest is an embarrassment of riches when it comes to natural history. I did not have much extra time this go-round, but managed to squeeze in a bit of exploration before and after the lecture and field trips.

You can bet I turned my big lens to this interesting fellow, who can also mimic sounds but not nearly as well as a mockingbird. It is a yellow-breasted chat, and if you turn to any bird book it will be with the warblers. Time for updates, authors. Last year, the chat was moved from the warblers (Parulidae) to its own monotypic (only one species) family, the Icteriidae. Good move. The chat is quite unwarblerlike in nearly every way, and although the warblers are good company to keep, it was high time the odd chat got carved out and into its own niche. 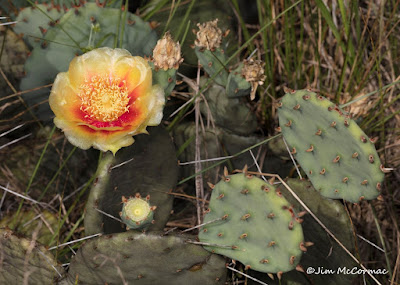 The sandy terraces of the Ohio River - the scraps that are left - are desertlike and this is reflected in some of the flora. Most notably, prickly-pear cactus, Opuntia humifusa. Our visits coincided with blooming, and the gorgeous yellow and orangish-red flowers are eye candy indeed. 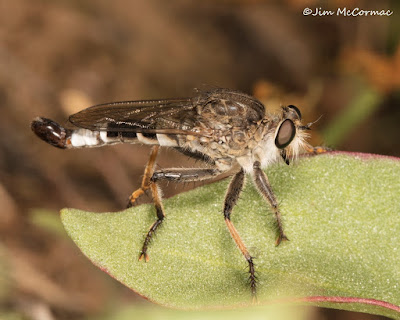 Many interesting invertebrate animals thrive in the sand terraces and this is one: Efferia albibarbis, one of the robberflies. This species has a penchant for perching on open sand or low plants, and as I always preach, a good photographer will get down on the level of his/her subject. In this case, I did, but it was not as fun as it sometimes is. Temperatures in the low 90's F had the sand broiling, and great care had to be taken in where one went prostrate. Those cacti will leave annoying needles impaled in your flesh. 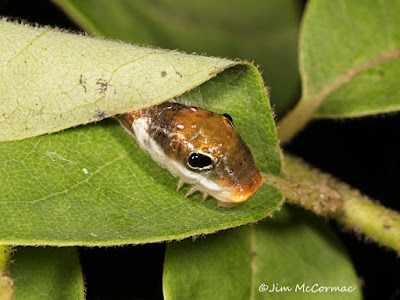 We spent a bit of time in some moist deciduous woodlands during our Sunday morning foray, and I think it was Chris Bedel who found this little fellow. A spicebush swallowtail butterfly caterpillar, peeking from his leafy lair, the rolled leaf of a spicebush shrub. 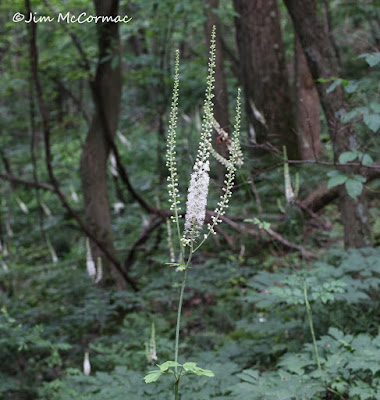 On the way to and from the workshop, I traveled through Shawnee State Forest. This place is always a goldmine of flora and fauna, in spite of the current powers-that-be doing way too much timber cutting. Among the legions of plants that I saw was this, the black cohosh, Actaea (formerly Cimicifuga) racemosa. The plants weren't this far along yet - the shot above is from a few years ago, later in June - but were in full bud and still conspicuous. Budding black cohosh means the potential of finding one of our cooler caterpillars, so I paid them close mind. 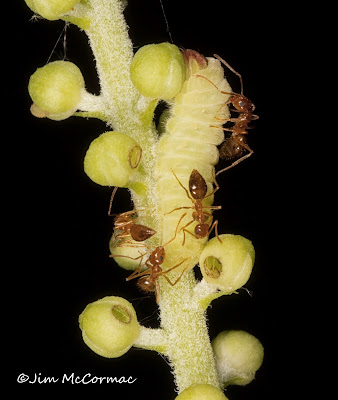 Yes! It did not take long to find the larvae of one of our more interesting caterpillars, that of the Appalachian azure butterfly, Celastrina neglectamajor. These little cats eat the buds of the cohosh and would be remarkably difficult to locate were it not for the ants. Ants?! Yes, all one need do is scan the budding flower spike for small ants, then look closely for the nearby caterpillars. In this shot, the caterpillar's head is at the top, buried in a flower bud. It is eating its way up the stalk, and cored out buds with telltale feeding holes can be seen.

At first initiation, one might think the ants were attacking the caterpillars. Nothing could be further from the case. Tending phalanxes of ants guard the caterpillars carefully, fending off small parasitoid flies, wasps and other would-be predators. The flies and wasps lay eggs on caterpillar hosts, and the hatchling grubs bore into the victim and ultimately eat it alive. But not with ferocious ants on hand, replete with powerful mandibles and strength far out of proportion to their elfin size.

In return for their protective services, the ants are rewarded with "honeydew" secreted by the caterpillar. This liquid is high in nutrients and for the ant, must be the equivalent of a rich protein shake. Such a relationship, where both parties benefit, is termed mutualism. Even more specifically in this case, the relationship is an example of myrmecophily, an alliance between ants and other insects. 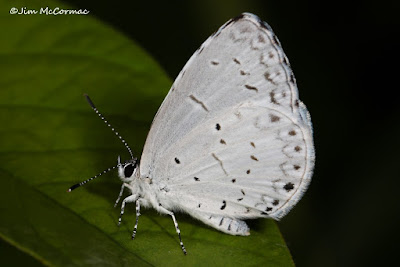 This is very close to what those caterpillars will become if they make it to adulthood. The photo actually shows the very similar summer azure, Celastrina neglecta. While I've seen Appalachian azures on a number of occasions, I've yet to get a decent image. 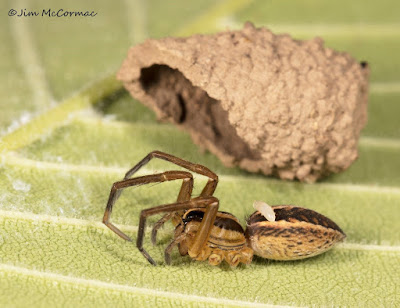 Bit of a horrorshow here, but a very cool tale. The paralyzed wolf spider, Rabida rabidosa, in the foreground was extracted from the little mud jug in the backdrop. During the Sunday morning field trip, we found a number of the little adobe crypts under a sheet of metal on the ground. A spider-hunting wasp known as Phanagenia bombycina grabbed the spider, paralyzed it with a sting, flew and dragged it "home". Once there, it then packed the paralyzed spider into this little mud tomb which she had already created. The wasp is a parasitoid, not a parasite. The latter take from their hosts but do not give anything in return, such as mites, lice, ticks, etc., but normally do not kill their host. The parasitoids DO kill their hosts and often in very grisly fashion.

Once the spider was entombed, the wasp laid an egg in the chamber then sealed everything up. The wasp grub can be seen feeding on the spider's back. To add to the horror, the wasp amputated five of the spider's legs before bringing it to the nest. Remember, the spider is only paralyzed by the wasp's powerful neurotoxin, not dead. She probably chewed those legs off to make for easier transport, and perhaps to better fit the victim into its crypt. After our group gaped for a bit at the gruesome scene, we put the spider and wasp grub back in the chamber and returned it to where we found it. An awesome example of parasitoidism!