Hunting dragons at a dragonfly conference 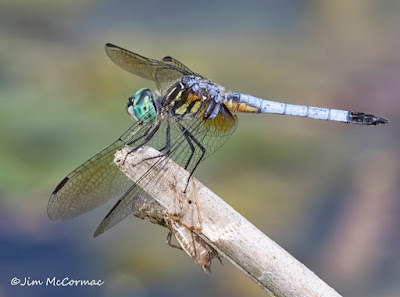 A blue dasher, Pachydiplax longipennis, commands a perch over a wetland rich in dragonflies and damselflies. Competition for this lookout was fierce, with dashers, Halloween pennants, and widow skimmers duking it out for this spot.

The Ohio Odonata Society had their annual meeting over the weekend, in partnership with the Ohio Dragonfly Survey. Thanks to MaLisa Spring, Shane Myers, Hancock Parks District and whoever else had a hand in putting this together. Base Camp was Oakwoods Nature Preserve, where the 100+ attendees heard a diverse selection of talks. Kurt Mead, all the way from northern Minnesota, was the headliner. He's the author of Dragonflies of the North Woods, a great pictorial reference. Kurt talked about the ongoing Minnesota Dragonfly Survey, which was especially appropriate, as Ohio is in the midst of out Ohio Dragonfly Survey. Volunteers of all levels wanted; CLICK HERE for details. 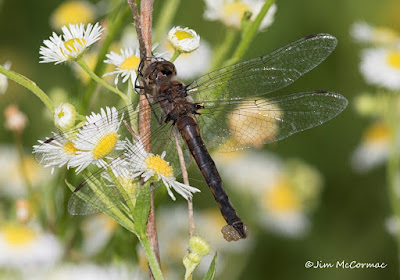 On Saturday afternoon, everyone split into groups and headed to various field trip sites to hunt dragons. I drew "The Landfill", which didn't sound overly appealing at face value. It turned out to be probably the most productive site of any. While a large landfill does occupy a distant portion of the vast tract of land, the rest of the property contains an interesting mosaic of meadows, ponds and wetlands, and swampy woods. Our crew, spearheaded by Linda Gilbert and myself, but including several other very knowledgeable people, mustered 24 species of damselflies and dragonflies.

This is a female common baskettail, Epitheca cynosura. While a bit of a plain jane, she's a masterful flyer, and allowed us the opportunity to see something interesting. You'll note the frothy brown mass emerging from her posterior end. 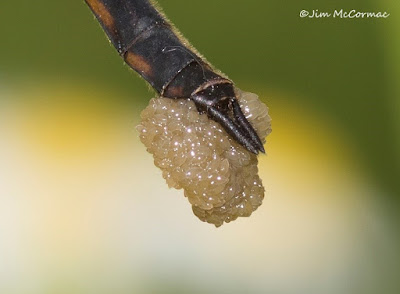 Eggs! Thousands, probably. As we watched, the mass grew as she pumped egg after egg into her "basket". Shortly after I made this image, she took wing and headed out over a nearby pond. Then she began dabbing her abdomen in the water to release the eggs. 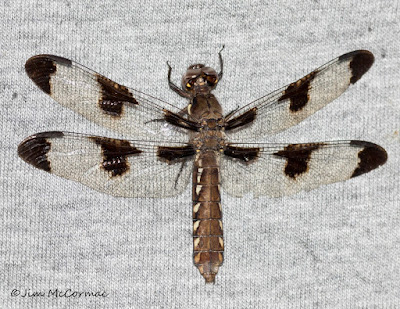 One of our most common and conspicuous species, the common whitetail, Plathemis lydia. This is the female, the male with its chalky-white abdomen is much easier to recognize. As often seems to happen on dragonfly trips, dragons will land on participants and that's what happened here. This whitetail rocketed over and landed on Kim Smith's gray t-shirt, allowing for nice photo ops. 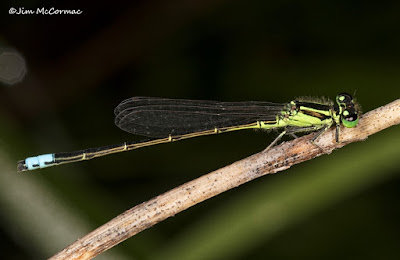 An abundant but inconspicuous damselfly, the eastern forktail, Ischnura verticalis. They're simple to find, but one must look in the grasses and sedges. Forktails are tiny, and ply their trade by flying through dense vegetation picking small insects from the plants. 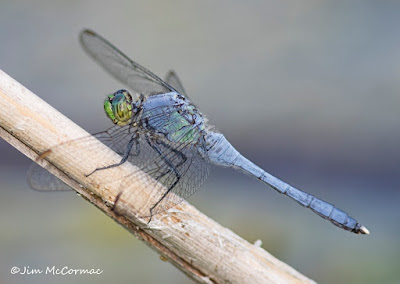 A genuine tough guy in the Odonata world, a male eastern pondhawk, Erythemis simplicicollis. This was my "spark" dragonfly many years ago. While traversing a damp meadow, I came across a pondhawk that had captured and was eating a calico pennant. Seeing a dragonfly eating another dragonfly and one that wasn't all that much smaller piqued my interest in learning more about these fascinating insects. Pondhawks are quite aggressive and routinely take out dragonflies up to their own size, if not larger. 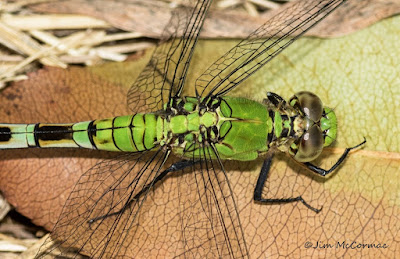 Like many species of dragonflies, eastern pondhawks are sexually dimorphic; the males and females look very different. This is the lime-green female. 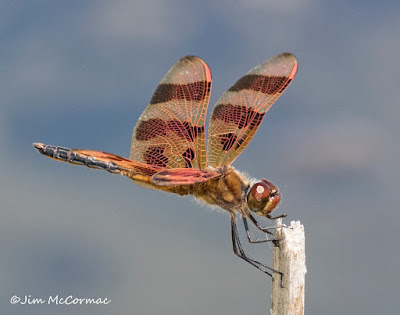 One of the landfill ponds and an adjacent meadow was loaded with Halloween pennants, Celithemis eponina. These showy dragons are prone to teeing up on very conspicuous perches, and habitually return to them making photos easy to obtain. 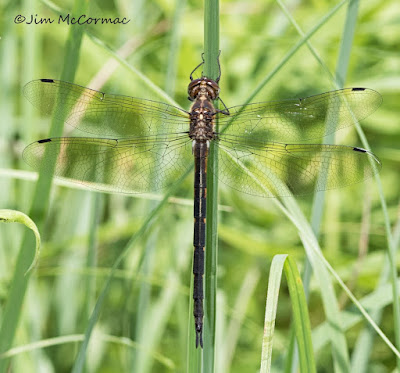 Probably the prize of the day was this mocha emerald, Somatochlora linearis. We first saw it - and at least one other - on the wing, cruising high overhead. Emeralds often spend much time in flight; finding them perched can be a challenge. But luck was with us. After watching this animal hawk about for about ten minutes, it shot down and landed nearly in front of us. 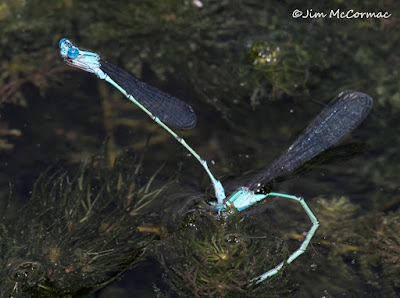 Our field trip allowed many chances to observe interesting behavior, such as these western slender bluets, Enallagma traviatum, are engaged in. The male, on the left, firmly grasps the female by her neck with his "claspers", or cerci. She is mostly underwater, depositing eggs into the submergent coontail plants. To ensure that another male does not interfere, the male must hold and guard her until the ovipositing is complete.