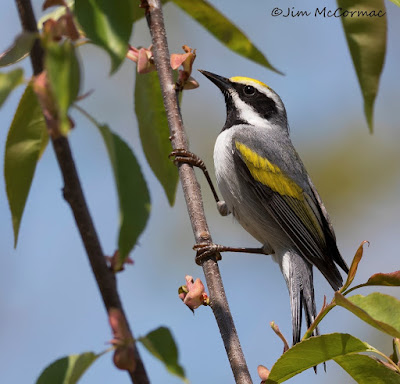 A male golden-winged warbler, with brilliant golden ingot stamped across his wing, forages in a choke cherry, Prunus virginiana. I made this image and the following ones a few days ago, while in between groups that I'm leading here at NettieBay Lodge in northern Michigan.

These acrobatic little warblers are not too tough to find up here, and seem especially smitten with cherries in the genus Prunus. A feeding bird will quickly flit about leafy boughs, quickly inspecting leaves and often dangling upside down like a chickadee. The primary reason that golden-wings are probably interested in cherries is due to caterpillars. Prunus is well known for the diversity and numbers of caterpillars that feed on the foliage, and the warblers are adept at ferreting them out.

Read on for a pictorial display of golden-winged warbler foraging technique. 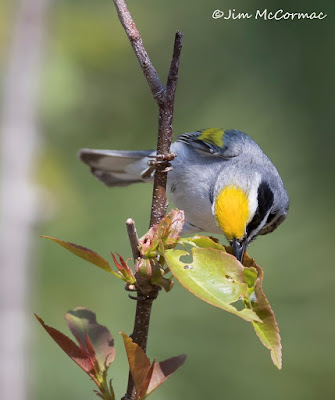 I had secreted myself and my large lens as best I could, after hearing a golden-winged warbler's lazy breezy song along a back road in the Pigeon River Country State Forest. It wasn't long before the bird presented itself - this species is not especially bashful - and I took the opportunity to closely watch the bird as it worked its way through the adjacent choke cherry colony.

Here, the warbler has found a potential treasure concealed in two silked-together cherry leaves, and has plunged its bill in for a better look. 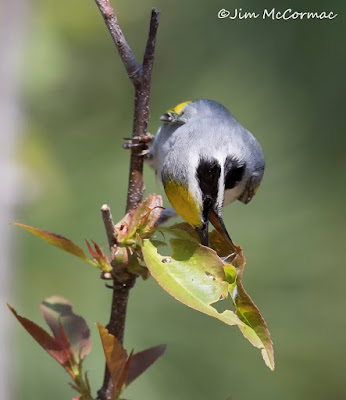 Detecting a tasty larval snack, the bird inserts its long sharp bill, and opens wide. The mandibles act as scissors, prying apart the caterpillar's lair. Just below the bird's bill tips, you can see the whitish cords of silk that the caterpillar used to seal shut its hiding spot. 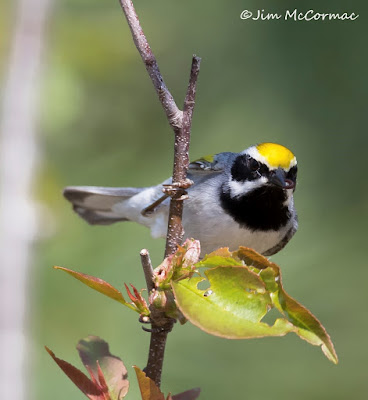 A second later, the warbler has a tiny but nutritious snack (as always, click the photo to enlarge). The entire operation, from discovery to swallow, took all of about ten seconds. Given the energy and sharp-eyed efficiency of golden-winged warblers, one must wonder how many caterpillars a bird must take in a day. Hundreds, probably.