Some birds from the jack pine plains

Today was my "day off" in between leading a pair of trips up here in the northern lower peninsula of Michigan. We're based at NettieBay Lodge, and the area's diversity is staggering. It's only about 20 minutes to huge jack pine plains on the west, and the more boreal habitats along Lake Huron about 20 minutes to the east. All manner of interesting places between, too.

Our first excursion met with much success. Killer looks of many wonderful species, and the sum total bird list was 131 species. Bonuses included a porcupine in a nearby tree, many interesting plants and insects, many species of warblers including golden-winged, Kirtland's, and mourning, and a nice late spring hawk migration along Lake Huron. That included a pair of sharp-shinned and a red-tailed hawk, a peregrine falcon, an osprey, dozens of turkey vultures, five bald eagles, and perhaps 80 broad-winged hawks.

I was up and out at dawn to head over to the jack pines, one of my favorite habitats. Following are a few photos from today's foray. 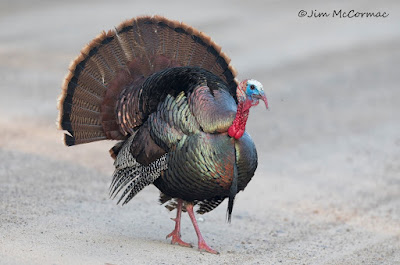 While traveling along a remote gravel lane, I encountered a large wild turkey gobbler, shepherding a pair of hens. He was busy strutting and fanning his tail and wings, and allowed me a surprisingly close approach. 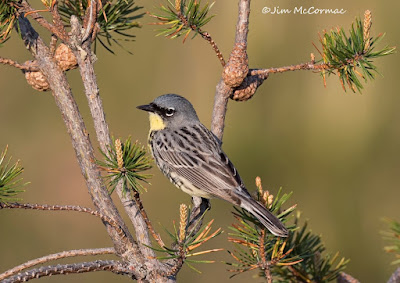 Stars of the jack pines are, it should go without saying, the Kirtland's warbler. Here, a male pauses briefly between bouts of singing and foraging. These largish warblers are fairly sluggish and tame. They are also curious. I have noted repeatedly that when I'm by myself, being quiet and still, a bird will often come near seemingly to inspect me before continuing his rounds. 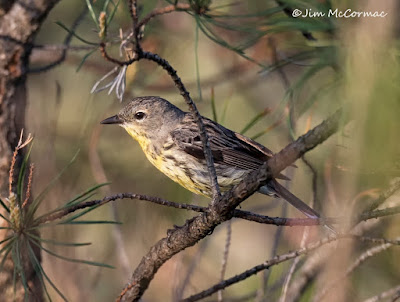 I was very pleased to see this female, who was following the male shown above. Female Kirtland's warblers are far skulkier and difficult to observe than the outgoing males, who often perch in conspicuous places for extended periods while singing. As I watched, the pair came together on the ground, and copulated. Missed that shot - the act lasts but a second or so - but the female then retreated to cover and sat for a few minutes preening. 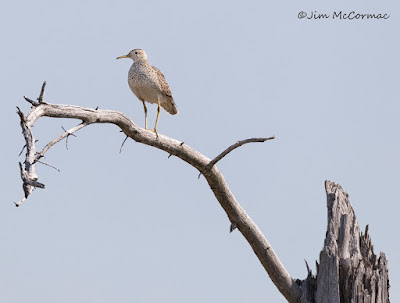 Upland sandpipers are fairly common in the jack pines, especially the very young open stands. They are prone to alighting atop conspicuous snags to survey their domain. 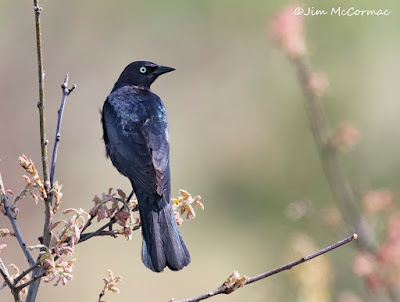 Not a great shot - sorry - but by this point it was early afternoon and harsh contrasting sunlight. But this is a cool bird and one that I don't find commonly in the jacks. It is a Brewer's blackbird, and a male with his bright staring white eyes. 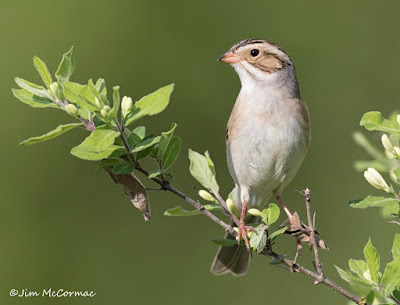 Sparrows are a big part of the jack pine avifauna, and at least ten breeding species can be found: eastern towhee, and chipping, clay-colored, field, vesper, savannah (rarely), song, Lincoln's, and white-throated sparrows, and dark-eyed junco. This is a clay-colored sparrow, a male in between delivering his odd buzzy insect-like song. 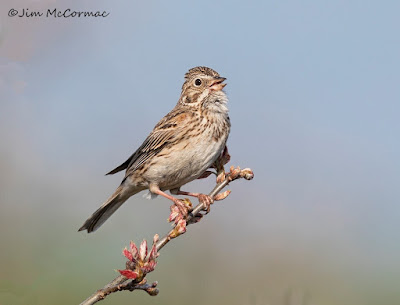 The most common of the jack pine sparrows is the vesper sparrow, which has a beautiful voice indeed. The song begins with two downslurred notes, then launches into a rambunctious series of buzzy trills. One hears them everywhere. 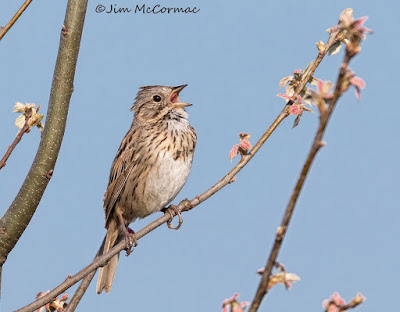 Finally, my favorite of the jack pine sparrows, the Lincoln's sparrow. Many birders know this one only from migration, south of the breeding grounds. When in passage, it has a well-deserved reputation as a furtive skulker and getting a good look at one of these dapper sparrows can be challenging. Furthermore, they seldom sing in migration.

These neatly dressed birds resemble a carefully manicured song sparrow. They drop the shyness on the nesting grounds - at least the males - and can be found teeing up on prominent perches belting out a boisterous buzzy song.

We'll be exploring more of the jack pines with our second group later this week, and I look forward to returning.