The "oldsquaws" of Lake Ontario

I made two northern forays this winter to Algonquin Provincial Park in Ontario, Canada. This vast holding is a treasure trove of cold weather goodies, and I was there to see beasts like the American marten, along with boreal birds that included both crossbills, gray jay, spruce grouse, and more. All in a striking wintry landscape. On the second trip, Debbie DiCarlo and I were scouting locations and details for potential future photo tours. We know it would make for a fantastic location, and could guarantee lots of fascinating photo subjects, but would anyone wish to deal with the cold? It was minus 24 F one morning, but normally temperatures are not that crisp, although Florida this place is not. Nonetheless, it's easy to dress for cold success and well worth the effort. For our current photo tours, CLICK HERE.

On both of these excursions, we made time to spend part of a day along the western side of Lake Ontario, which is enroute. There are numerous excellent lake access points from Hamilton to Toronto, and ducks abound. Lake Ontario almost never freezes due to a variety of factors, thus hardy fowl find it a reliable food-rich wintering ground. Of special interest to me are the scads of overwintering long-tailed ducks (formerly known as "oldsquaw"). The eastern waters of Ohio's section of Lake Erie are less than a hundred miles to the west, yet this duck is a rarity with us. But not so on Lake Ontario, where they occur by the thousands in winter. 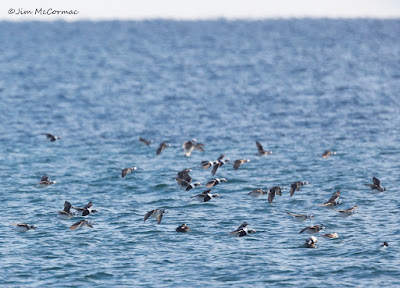 A small portion of a massive flock of long-tailed ducks wings by Bronte, Ontario, not far west of Toronto. At one point, at least a thousand birds were in sight. 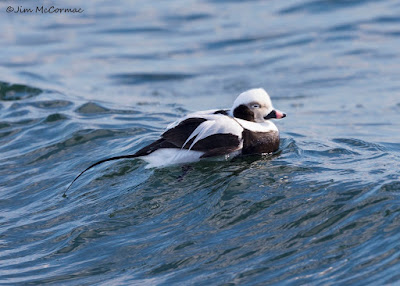 A handsome drake long-tailed duck crests a wave in the chilly waters of Lake Ontario. These ducks are deep divers and not daunted by the depths of this lake, which averages 283 feet deep. Long-tailed can dive that deep, or nearly so, to reach mussel beds. 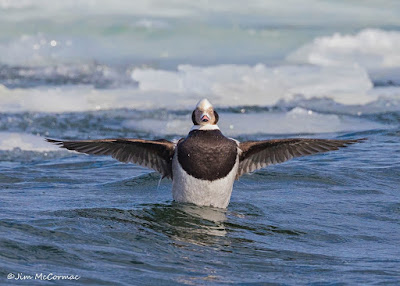 Another drake shows off his pectoral muscles, while ice drifts in the background. I never fail to be amazed by the hardiness of such beasts, and the amazing insulating qualities of their feathers. You or I would not last long if we fell into this drink. 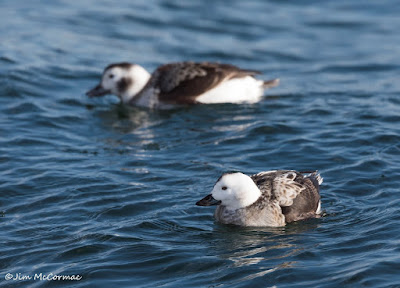 A juvenile long-tailed duck floats before an older female. At some places, such as the pier at the marina in downtown Bronte, the birds are exceptionally approachable. Indeed, they seem curious about people and would occasionally approach quite closely. 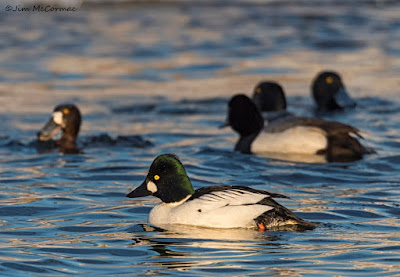 It wasn't only long-tailed ducks, of course. Common goldeneye are also common, and just as cold-tolerant. Here, a male goldeneye fronts a group of greater scaup - a hen on the left, and three drakes. 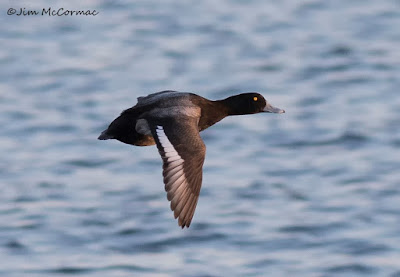 Here's a drake greater scaup caught in flight. Note the white wingstripe extends well out onto the primary flight feathers, and the birds is big-billed with a nicely rounded head. The much less hardy lesser scaup is quite similar, but nearly all the birds that I saw up there where greaters, as would be expected in mid-winter. 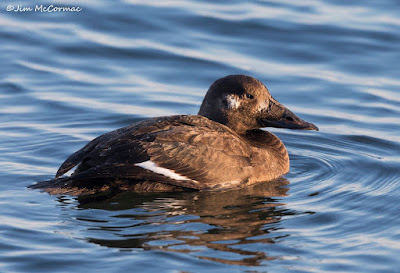 Yet another treat were numerous white-winged scoters. This female posed closely in gorgeous light but there were plenty of the striking coal-black adult males about. This species, like the long-tailed duck, is a deep diver and right at home on deepwater Lake Ontario.

Midwinter birder/photographer visitors to Lake Ontario will likely have to deal with very frosty temperatures, but it's worth it for the duck show, and photographic opportunities.

These are beautiful looking photos. Just seeing a thousand birds at one time, is something amazing to witness. Thanks again. Looking forward for more photos.
World of Animals