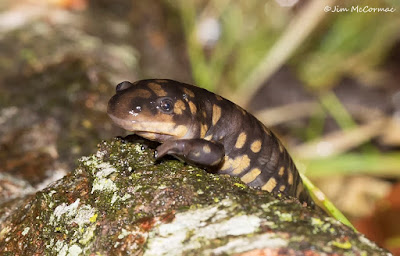 A jumbo tiger salamander, Ambystoma tigrinum, peeks over a log. I photographed the amphibious brute back on February 15 on a nighttime prowl through the backcountry of Champaign and Logan counties. That evening was relatively warm and rainy, and although a bit early in the salamander migration season, some animals were moving. We've had nearly no good conditions in this part of the state since - too dry, too cold, etc. 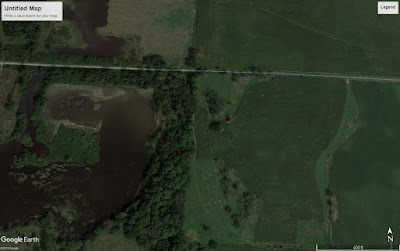 A route that I like to patrol when looking for migrant salamanders goes through an oft-flooded area dominated by porous limestone karst topography. When rains bring the water table up, the h2o comes bubbling from the ground, saturating soils and flooding large areas. The Google Earth map above depicts one of my favorite salamander haunts. Nearly uninhabited by people - because their homesteads would routinely be flooded - and dominated by a nice mosaic of habitats.

Habitats that are not only desired by tiger salamanders and others in the amphibious crowd, but also owls. Namely, the eastern screech-owl. The aerial photo shows a screech-owl Eden: a juxtaposition of open meadows bordering brushy copses, scattered stands of larger trees, and water - lots of water. Screech-owls, in general, are not really birds of dense woodlands, but seem to reach peak numbers in largely open habitats such as shown above.

If you find yourself in any sort of similar situation - scruffy woods, lots of interspersed open country, small streams, wetlands or damp meadows - I guarantee that screech-owls are close at hand. This is easily our most common owl in Ohio, and localized populations can be large. Perhaps the most notable illumination into screech-owl numbers came during a Toledo area Christmas Bird Count conducted on January 6, 1982. Intrepid owlers detected 112 owls! 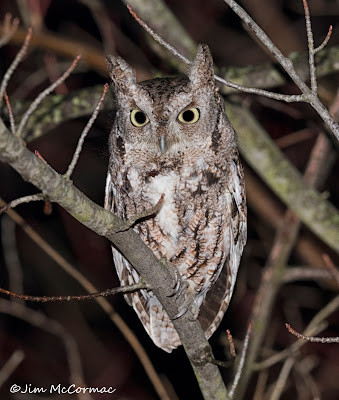 When I exited the car and drank in the sounds of an abnormally warm February evening - the odd spring peeper and western chorus frog calls, gadwall and other ducks chortling in the nearby marsh - I decided to call in an owl. A few renditions of the quavering mellifluous whistles triggered a response within a minute or two. Screech-owls can be quite ventriloquial, and even though this one sounded distant, I knew it wasn't.

A quick flick of the flashlight revealed the bird sitting about 20 feet away low in shrubs, looking around and occasional calling. We remained in this spot for about 10-15 minutes, and the owl remained the entire time. It seemed to quickly disregard us and resume its scanning for prey. I'd bet a newt that this bird and its mate gorge heavily on migrant salamanders, such as the tigers, when the amphibians make their vernal overland exodus to breeding pools. Screech-owls are well known for their fondness of aquatic fare, even snatching small fish, hence their proclivity for watery places.

This bird seems to be an intermediate brownish morph. Eastern screech-owls typically manifest two color morphs: ashy gray, and a brighter rufous-red coloration, with these intermediate forms cropping up occasionally.

NOTE: The color forms of screech-owls, rough-legged hawks, gray squirrels, etc. are not PHASES, although they are often referred to that way. A phase is a temporary condition, like a phase of the moon. Something in a phase will not remain that way; it will eventually transition to something else. Screech-owls and other animals that manifest distinctly different color forms normally do not change, or phase out of their innate coloration - they remain as such for their lifetime. Thus, such animals are properly termed MORPHS.

To make this image I used the Canon 5D IV and Canon 500mm f/4 II lens, handheld. My salamandering buddy put mild light from the outer sphere of a flashlight's glow on the bird, so I could find it and focus. A Canon 600 speedlite with diffuser, set to fairly low intensity, provided fill light. Camera setting were ISO 800, f/8, and 1/80 second. While the flash helps freeze the scene, the lens' image stabilization is extraordinary, allowing crisp handheld shots of a large camera rig at rather slow shutter speeds.

The owl-admiring paparazzi seemed not to bother the bird at all, and it was still there, head aswivel watching for salamanders, when we left.

Aaargh. Still looking for my first screech owl. I've heard plenty. Never laid eyes on one. I've been checking out eBird for recent photos of them around Cincy. The struggle continues. Love your pics and your blog is great!