Nature: Insects stride the boundary of water and air 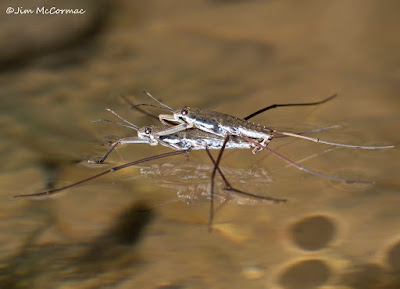 
With swirls of blissful motion;


Moreno’s beautiful haiku captures the allure of these graceful insects. Water striders are the epitome of aquatic insect art.


One needn’t venture far to find water striders. They are found throughout Ohio and are common on sluggish water in streams, ponds and lakes. I saw a mating pair during a recent trip to southern Ohio. In spite of temperatures in the 30s, numerous striders skated about the backwaters of a stream that we were investigating.


Sometimes known as “Jesus bugs” for their seemingly supernatural ability to walk across water, striders actually employ high-tech aquatic hardware to master watery haunts. As do all insects, water striders have six legs, but the rear two sets are greatly elongated. They serve as powerful oars and outriggers, quickly jetting the bug about and providing stability.
The undersurface of the legs is coated with specialized “hydrophobic” hairs that repel water to such a remarkable degree that scientists have studied striders, seeking human applications. The tiny hairs are clumped in dense fascicles, providing buoyancy.


Water striders live at the interface of air and water, exploiting the peculiar properties of surface tension. Water molecules “reject” air and where water meets air, water molecules bond more tightly with one another. The effect is akin to a thin elastic membrane covering the water’s surface. Striders effortlessly traverse this watery film, almost never breaking through.


These six-legged swimmers might appear to be loafing about, but that’s not the case. Water striders are essentially insect lifeguards, but instead of rescuing their victims, they kill and eat them. Hapless insects are constantly falling into water for one reason or another. Those that do, at least the small ones, are likely to meet a water strider.


When an insect falls into water, it creates ripples. If still alive, its struggles create even more ripples. The disturbance telegraphs a signal to water striders, who glide over to investigate.


Upon arrival, the strider seizes the prey with its powerful forelegs. It then jabs a syringe like proboscis into the victim, injecting compounds that soften inner tissues. The strider then sucks out the contents, leaving an empty husk.
Little escapes the notice of water striders, and they serve an important role as a cleanup crew in watery habitats. They also consume mosquito larvae, which must venture to the water’s surface to obtain air through a structure resembling a snorkel. This puts the larva at great risk of strider predation, and most readers, no doubt, will appreciate this choice in prey.


One might suspect fish would be likely strider predators, but apparently not. Water striders manufacture foul substances from abdominal organs that repel the fishy crowd.


Other insects do capture them, and perhaps the most interesting of these predators is a parasitic wasp. Female water striders dive to deposit eggs on rocks or underwater vegetation, securing them with gelatinous secretions. This doesn’t thwart tiny female wasps in the genus Tiphodytes, who swim down and lay eggs within the strider eggs. The hatchling wasp grubs then consume the eggs’ contents.


There are a number of water strider species in Ohio, and the common water strider is abundant statewide. Taxonomists have placed it in a wonderfully named scientific genus: Aquarius.


Naturalist Jim McCormac writes a column for The Dispatch on the first, third and fifth Sundays of the month. He also writes about nature at www.jimmccormac.blogspot.com.

Comment not about this article, I really enjoy your column.
My husband and I live at Buckeye Lake and have a flock of what we believe are Red-breasted Merganzers. We have never seen them before, appears not native to Ohio.

May I send you a picture?

Sure, but I bet they are red-breasted mergansers. They’re distinctive and many are migrating through the area now.