I got a cool email today from Ron Sima, letting me know that his wife Mary Lou had discovered a mostly white hummingbird at Inniswood Metro Gardens in Westerville, Ohio, today. Mary Lou, who is a photographer, was not there to take photos of hummingbirds but nonetheless managed some decent captures of the birds. I appreciate her allowing me to share them. UPDATE: Joe Hammond just informed me that someone saw/photographed this bird in the same locale last Saturday, with that report coming to light today. So maybe it'll stick around for a while yet. 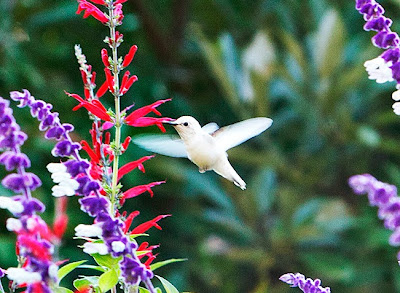 Here's our snowy hummer, a striking animal indeed. Rather than an albino, it is no doubt a leucistic specimen. I've written about leucism a number of times, such as HERE. I even featured a leucistic hummingbird once, not that dissimilar to this one, HERE. 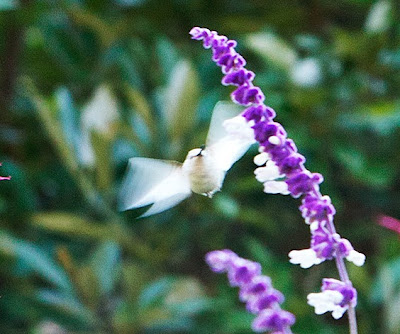 I'm sure it was a shock to see an essentially all white hummingbird foraging in the herb garden on a frosty morning. But hummingbirds are tough, and can ride out some pretty rough weather if food is available, and it looks like there's plenty of that in this garden. 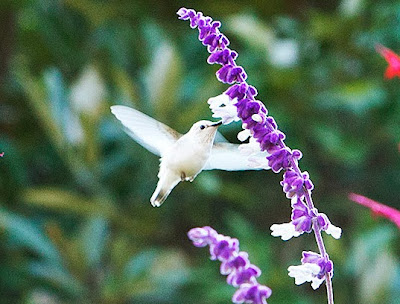 Of course, the million dollar question: what species? I pick up faint buffy washes of pigment bleeding through on the sides of the belly in some shots, and that coupled with the overall shape make me wonder if it is a hummer in the genus Selasphorus. If so, it'd most likely be a Rufous Hummingbird. But I'm by no means sure, and we really need some pretty tight crisp images to try and make a call.

Obviously a white hummingbird is going to attract undue attention no matter what time of year it appears. But ANY hummingbird found around here after mid-October should be closely scrutinized as there's a good chance it'll be a Rufous Hummingbird or some of other western species. We're up to five species in Ohio now, and excepting an August record of Green Violet-ear, all of them (including most of our dozens of records of Rufous Hummingbird) have come from October/November.

I'm going to run over to Inniswood tomorrow and try and get some images, and hopefully other people will do the same. It'll be interesting to see if we can figure out the identity of this animal, should it linger.

HERE is a link to the Inniswood Metro Garden website, which includes directions. This site also includes a map of the park and the locations of the various gardens. The hummingbird was frequenting the Herb Garden.

Thanks to Mary Lou Sima for bringing this unusual bird to light, and for sharing her photos.
at October 21, 2013

AMAZING!!! Thanks for sharing.

Going over tonight. Will have to look for it

My family and I saw this tonight! We just stumbled upon it and asked someone what it was. It was beautiful i hope that others get a chance to see it.

I photographed a white hummingbird at Inniswood today, October 29, 2013. If you are interested in seeing the photos, please contact me at ncshew@sbcglobal.net. Serious inquiries only, please.