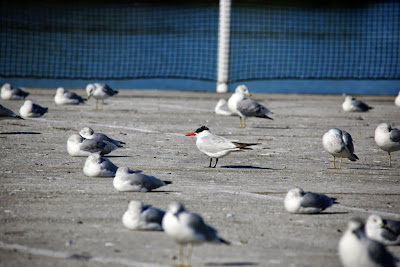 A giant Caspian Tern, Hydroprogne caspia, stands out among a raft of Ring-billed Gulls. As fate would have it, I ran across several of these animals, the world's largest tern, on a recent trip to Lake Erie. The tern is significantly larger than the gull, in every dimension.

I've written six cover articles for Bird Watcher's Digest to date, and the Caspian Tern was one of those subjects. It was a fun piece to write, and its appearance in the Fall 2009 issue coincided with that year's Midwest Birding Symposium. The tern was MBS's logo bird, so the article sync'ed well with the conference. Following is an excerpt from the '09 article, and if you aren't hip to Bird Watcher's Digest, check it out HERE. 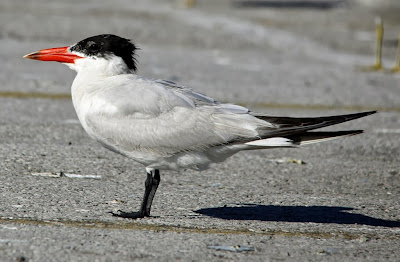 Being a fish has its ups and downs. On the pro side, life is a perpetual swim in a spa, the noise and abrasiveness of the terrestrial world muted by a cool watery shield. The ability to glide effortlessly about in a state of semi-weightlessness is another allure. For the most part, all is a bubbly bowl of cherries, softly filtered golden light gently amplifying silvery schools of fish gracefully navigating the waterscape.

The con is death: sudden, horrifying, unexpected doom. And few greater terrors could exist for the scaly crowd than a Caspian tern. Imagine an emerald shiner, placidly drifting about, when POW! A sudden eruption shatters the tranquility of the depths as a bubble-distorted blur of white and red rockets through the water. Before the fish can react, that scarlet torpedo morphs into a ferocious bill attached to a brutish, winged sushi-eater. With a quick snap the minnow is plucked from the water. High in the air, the tern gives an adept flick of its bill, and down the hatch goes the fish headfirst, its world ended in one shocking instant, its fate now to return as guano.

The Caspian tern is the world's largest tern, easily outweighing the other 44 or so species, and also stretching the tape in terms of length and wingspan. In a family of comparative prissiness—with names such as fairy tern, least tern, and whiskered tern—our protagonist is the gargantuan beast, a Goliath among a cast of Davids. It takes nearly 16 least terns—the world's smallest tern—to equal the mass of one Caspian tern.

These black and white beauties even outsize many gulls. The gold standard for gull comparisons across much of North America is the familiar ring-billed gull, abundant from coast to coast. It's a big, can't-miss bird. But the Caspian tern is bigger. Its wingspan is two inches longer, and it outweighs the gull by nearly a half-pound.

Thus, when they take to the wing and commence hunting, Caspians can't be missed. As hefty as gulls, they patrol on big, broad wings with their prominent scarlet-red bill angled down as they scan for prey. You may hear them before you see them, though. As befits the king of the terns, Caspians vent a loud, jarring croaking—RRRRAAAA—that carries considerable distances. If disturbed, they may issue the wonderfully named "gakkering" call (there's a Scrabble winner for you). Researchers Francesca Cuthbert and Linda Wires describe it in their Birds of North America monograph as a "vehement, rasping, ra ra ra-ra-rarau." However you describe it, gakkering often works to scare off intruders in the nest colonies—especially when combined with strafing by an angry cadre of pterodactyl-like giants with four-foot wingspans and blood-red bills the size of small cigars. 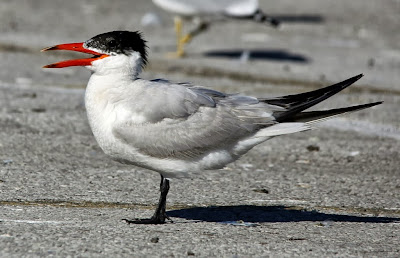 They are quite handsome with their black bowlers and big orange bills. I love to see/hear the juveniles that travel with their parent this time of year. They are such pitiful loud beggars.