And now for something completely different: a walking lichen 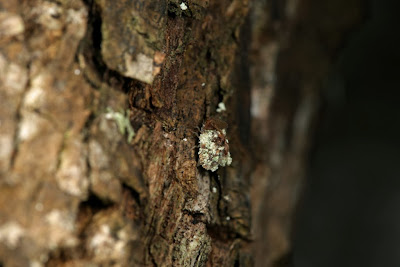 Every now and again, one sees some mighty strange things out in the woods. Stop to take a breather, lean against a stout tree, let your gaze run over the lichen-shingled bark, and WHOA! One of those lichens just moved! Really, it did!

See that little bump of a lichen, dead center in the photo? It's a walking lichen. For real.

On a recent trip to southern Ohio, I was keeping a sharp eye out for these curious bits of mobile lichen clumps, which is pretty much what one must do to spot them. It wasn't too long before a piece of lichen detached itself from the lichenberg that it was attached to, and began to scuttle off. I gave chase, and was able to make some images of this most curious of beasts. 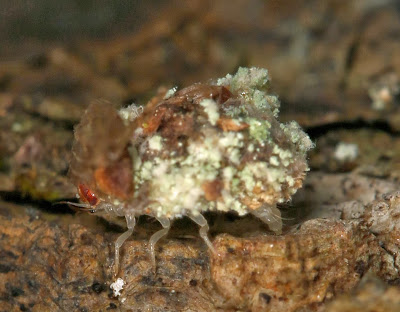 Ah, the secret to the lichen clump's mobility becomes exposed under magnification. Three legs project from the crusty pile, and we can safely assume three others are sticking out the other side. There's the tip of an abdomen, jutting down from the right rear. It appears we have an entomological Trojan Horse on our hands; a murderous fiend disguising itself with innocent lichen bits, the better to ravage the lesser fauna of the tree trunk. Not only that, but the soldier clad in lichens is much better concealed from those who might be higher on the food chain, such as a Downy Woodpecker.
What we've got is the predatory larva of the Green Lacewing, Leucochrysa pavida. These interesting insects are quite common, and I'll guarantee if you examine enough lichen-festooned tree trunks, you'll eventually find one. I toyed with attempting to extricate the critter from its armoring, but decided against it. I probably would have just destroyed the larva, so well attached is its ghillie suit of lichens.


Lacewing larvae are predators, and if you look closely at the left side of the clump, you'll see its long brownish mandibles projecting downward. A homicidal lichen clump, indeed. The larva detaches tiny lichen fragments from the bark, and attaches them to hairs on its upper surface using a specialized sticky silk. Eventually, this is the result, and the debris packet will later become its cocoon. In the interim, the lacewing uses those tonglike mandibles to subdue aphids and other lesser animals, which it then eats.

Here's the adult lacewing. Well, I'm not 100% sure this is the Green Lacewing, Leucochrysa pavida - the adult of the larva featured above - but it's at least very similar. You've probably seen these, as adult lacewings are far more conspicuous than the larvae. Certain species of lacewings are predatory as adults, while others feed on liquids such as honeydew secreted by aphids, and yet others take pollen. But insofar as I know, they are all voracious predators in the larval stage, and few if any of them do it in such style as the lichen-cloaked Green Lacewing, Leucochrysa pavida.