Duck Stamps evidence that good can come from bad 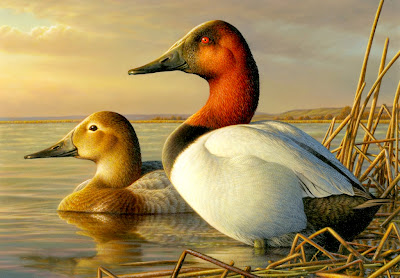 
Duck Stamps evidence that good can come from bad

On May 9, 1934, a dust storm of Armageddon-like magnitude roared through the Great Plains, tossing tons of dirt skyward. The drought- stricken area was in the midst of the Dust Bowl, and its sun-baked soil was swirling aloft in great black clouds.

Chicago, well to the east, was coated with an estimated 6,000 tons of windblown earth.

The human toll from the Dust Bowl was great, and so was the cost to wildlife. Ducks, already hammered by unregulated hunting and wetland losses, were battered by the Dust Bowl. Conservation-minded people became alarmed by the decline in waterfowl populations.

In 1934 — the same year as the epic storm that grimed the Windy City — the Federal Migratory Bird Hunting and Conservation Stamp was launched. It has since become better known as the Duck Stamp.

Purchasing a stamp was — and is — required to hunt waterfowl, but hunters almost universally supported the stamp’s creation even if it was a tax on their sport.

The Duck Stamp is one of the most successful conservation strategies in history. In the 80 years since its inception, the stamp has generated more than $800 million, which has been used to purchase or lease more than 6 million acres of prime habitat — an area larger than New Jersey. The U.S. Fish & Wildlife Service has been a competent manager of Duck Stamp money: 98 cents of every dollar goes to land acquisition.

Habitats purchased by stamp money help ducks, but that’s not all. One-third of federally endangered and threatened plants and animals are supported by Duck Stamp purchases.

The inaugural Duck Stamp featured a beautiful painting of a pair of mallards by Jay “Ding” Darling, the stamp’s architect. This established the framework of original artworks selected by a jury. The 1934 stamp cost $1; the 2013 stamp, $15. Today, a mint 1934 stamp is worth about $600.

It’s a huge honor for an artist to win the stamp art contest. To date, 59 artists have done so, with only a dozen winning multiple times.

On Sept. 28, Elyria native Adam Grimm entered an artistically rarefied atmosphere when his painting of a pair of canvasbacks was selected for the 81st Duck Stamp. He had won in 2000 at age 21 with his rendering of a mottled duck. Grimm walks the talk: He invested earnings from his art into habitat restoration at the Ottawa refuge.

Anyone interested in nature can also help by buying a stamp. You’ll never spend a better 15 bucks.
For more information, visit www.fws.gov/duck stamps.

Naturalist Jim McCormac writes a column for The Dispatch on the first and third Sundays of the month. He also writes about nature at www.jimmccormac. blogspot.com.