Tim Tolford, who is one of a small handful of people that is licensed to band hummingbirds in this neck of the woods, sent along some shots of a real eye-catcher. The hummer shown below is quite the oddity, and turned up in recently in St. Louisville, Ohio. 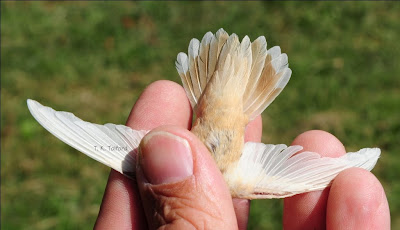 This is a leucistic female Ruby-throated Hummingbird, and it is cool! One can only imagine the hubbub and speculation if this thing winged by a bunch of birders. 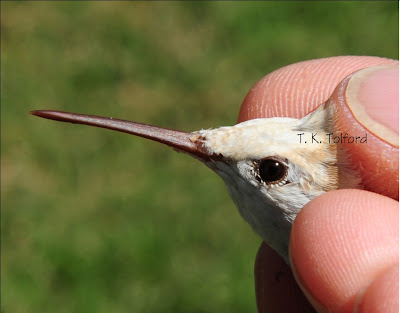 Leucism - loo-kis-ism - is a genetic abnormality that causes color pigments to become washed out and pale, creating a bleached look. Albinism, which causes a similar look, is caused by melanin production becoming greatly reduced or curtailed, and pure albinos have pinkish eyes among other differences. Also, a pure albino wild bird is not likely to fare well or last long, due to the resultant weakening of hard structures such as feather shafts.
Although a strongly leucistic animal such as this hummingbird doesn't suffer the structural disadvantages of an albino, at least to as great a degree, I still wouldn't lay odds on the longterm prospects of our snowbird. For one, it is probably much more detectable to predators, especially when in a semi-torpor at night. And I would also wonder about its ability to attract a mate, but who knows, maybe the hummer-dudes will think she is cooler than the average bird.
Anyway, Tim reports that the snowy hummer seemed to be doing just fine, although it was seemingly the target of excessive aggression from its "normal" compadres.
You can read more details about this interesting bird HERE.
Thanks to Tim for sharing his photos, and for all his avian research work.
at September 05, 2010