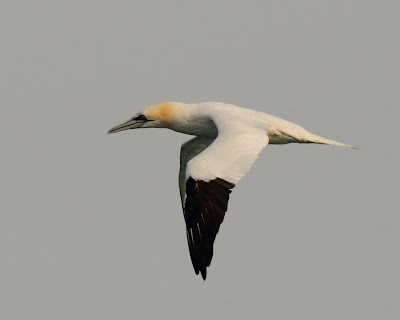 Photo: Dane Adams
One of the birds that I saw on my recent trip to New Jersey's Barnegat Light was the Northern Gannet, Morus bassanus. These giant boobies were regularly flying by and hunting some distance offshore, but none came close enough for my somewhat meager 300 mm lens.

Dane Adams, whose beautiful photos have graced this blog on numerous occasions, happened to be at a coastal Florida locale about the same time that I was in NJ. He too was intrigued by these massive seabirds and as you can see, managed some fabulous shots. 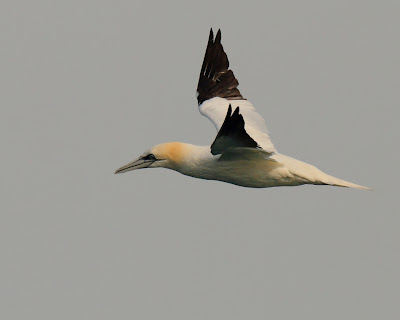 Photo: Dane Adams
An adult gannet is a thing of beauty; a massive white beast with wings dipped in black ink and a head of peachy-brown. While they appear lumbering and ungainly when perched, once airborn the gannet transforms to an aeronautical marvel. The birds in Dane's photos are at least five years old. Youngsters are completely clad in dark chocolate-brown spangled with flecks of white; it takes them from four to five years to complete cast off their dingy juvenile plumage and transform to the clean blanco-negro colors of an adult.

One thing that doesn't change respective to age is the huge size of the Northern Gannet. Massive is a fitting adjective. Try a body length of over three feet, and a wingspan that would stretch from your blogger's toes to the crown of his head - just over six feet! These extraordinary dimensions make the gannet's hunting technique all the more remarkable, as we shall see.

Gannets are colonial breeders, and raise their single chicks on ledges of precipitous sea cliffs along the North Atlantic. There are only about six colonies in North American waters - the most famous is on Bonaventure Island in North America's greatest estuary, the expansive Gulf of St. Lawrence in Quebec, Canada. Some 120,000 gannets nest on Bonaventure, and a trip to this place is high on my bucket list. Many more colonies can be found on the other side of the pond, along coastal Great Britain and Ireland.

Every few years, a young Northern Gannet bumbles its way into Lake Erie and Ohio, and creates quite  stir. I've seen several Ohio gannets, and the presence of one of these massive seabirds off the coast of Cleveland or in the harbor of a port city such as Lorain is truly incredible to witness. 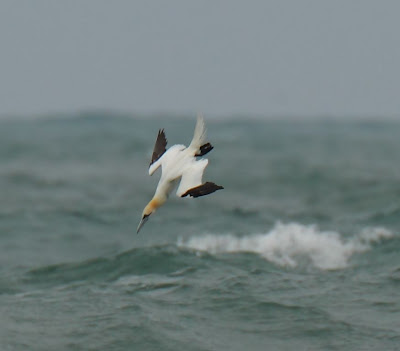 Photo: Dane Adams
The boobies - family Sulidae - are plunge-divers, and the Northern Gannet is no exception. A hunting gannet patrols the sea, scanning for fish schools from heights of up to 130 feet, maybe even higher. When suitable piscine prey are spotted, the fun starts. The gannet tucks its wings into an aerodynamic boomerang, and transforms into a streamlined air to sea missile. Rocketing towards the water's surface at incredible speeds, the gannet tweaks its trajectory with slight adjustments of its bladelike primary flight feathers. Just before striking the surface, the diving gannet pulls its wings completely back and assumes the shape of a sleek torpedo. The margin of error when engaging in such high-velocity power dives is slight, and it is not unheard of for gannets to miscalculate and injure themselves. CLICK HERE for incredible video of Northern Gannets plunge-diving.

Sometimes large numbers of gannets feed in small areas when sizeable schools of herring or other prey fish are found. The resultant barrage of mammoth birds rocketing seaward and striking the water, sending up explosive plumes of spray, reminds me of some sort of wartime carpet-bombing attack. If fish were capable of emotions, horror and confusion would reign as their quiet underwater world is suddenly blown to smithereens by this avian bombardment, the hapless scaly prey snatched from the depths by giant tonglike bills.

Thanks as always to Dane Adams for sharing his wonderful photographic skills.
at February 16, 2012

Awesome shots of one of my Top 5 favorite birds. I haven't had the pleasure of Ile Bonaventure yet, but I can put in a good word for Cape St. Mary's in Newfoundland as far as gannet colonies go. The surrounding scenery is breathtaking.