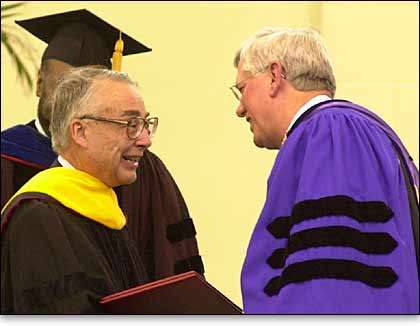 The botany world lost one of its brightest minds today with the passing of Edward G. Voss. Ed was known far and wide, throughout North America and beyond, due to his prolific accomplishments and long history of activity in the botany world.

Voss was born in Delaware, Ohio and went on to earn his bachelor's degree in biology from Denison in 1950, then he was off to the University of Michigan where he obtained his masters one year later, and then his Ph.D in botany in 1954. Ed never left the U of M, formally joining its staff in 1956, and remaining until his retirement in 1996. Even after that, he maintained an office in the University's herbarium and remained active and engaged.

Like all great botanists, Ed was a consummate field man and spent 35 summers teaching students about plants at the University of Michigan's Pellston Field Station in northern Michigan. Scores of students were influenced by Voss, and many went on to have great careers in biology.

Ed didn't just study and collect plants in the field, he put his knowledge to work in numerous publications, perhaps most notably the landmark Michigan Flora series. Published in three volumes - 1972, 1985, and 1996 - these books set a high standard for regional floras, and each volume sported color plates of Ed's photographs - yet another talent that he excelled at. We Ohio botanists often would refer to Ed's books more than any of the Ohio floras! They were better than our references, and even though the Michigan Floras were scientifically written and accurate to the nth degree, Voss still slipped in examples of his wry humor, which led the reader to occasionally discover little unexpected gems. For example, when mentioning oregano, Origanum vulgare, he mentions that this Eurasian plant is unlikely to be found persisting in the wild in Michigan - except on the surface of pizzas!

An undisputed expert in botanical nomenclature, Voss was involved with the editorial committee of the International Code of Botanical Nomenclature for nearly 20 years, either as its secretary or chairman. If one of us bungled a plant name in Ed's presence, we would surely hear about it! Ed also served as editor of The Michigan Botanist, and was long active in the Michigan Botanical Club. A dedicated conservationist - as ALL good scientists should be! - Voss was a longtime member of the Sierra Club, The Nature Conservancy, and the Wilderness Society.

I remember how surprised and impressed I was when I learned that Ed was a very keen entomologist, and knew butterflies well. Not only that, he was a moth man and published several scholarly papers on moths!

There are enough Ed Voss accomplishments to fill a book. But all of that aside, what Ed did throughout his career that was at least of equal importance to his academic work was his encouragement of others. For years, I and other budding young botanists would make annual pilgrimages to Ann Arbor to visit Ed and his colleague Tony Reznicek. We would come bearing sheets and sheets of "mystery" plants - specimens that try as we might, we could not satisfactorily attach a name to. Ed would always, with great patience and never a trace of condescension, work us through our mysteries until a name was arrived at. I, and the others of us that made these journeys to The Man, learned not only a great deal about identifying plants, but also how to encourage students.

Many years ago, we started the Ohio Rare Plant Committee, a group of botanists that meet biennially to discuss and assign statuses to Ohio's rare flora. Ed, along with Tony Reznicek, always made the long drive from Ann Arbor to Columbus to participate in these meetings. Later, when we founded the Ohio Botanical Symposium, Ed always came down for that as well. Particpation in these events was classic Ed Voss - he'd do whatever he could to encourage interest in botany and conservation, even if it meant departing from his busy agenda to drive down to Ohio and spend time with the Buckeye State botanists.

Next Tuesday, February 21st, is the date of our next Ohio Rare Plant Committee meeting. Ed will be dearly missed. The botanical and conservation communities have lost a great champion in Ed Voss.
at February 13, 2012

What an interesting man and an inspiring life!

My college mentor was a friend of Dr. Voss and also held his Ph.D in Paleo-ecology from U-M. Subsquently, when I was working a NSF grant at school one summer, I sent and received specimens from Dr. Voss for our herbarium. Education by proxy, delivered from one generation to the next. (A post script here: My mentor, Dr. Ron Kapp, died of a brain tumor at the age of 56... many of us believe it was caused by breathing toluene and other nasty herbarium substances for years. A caution for young scientists.)

I was lucky enough to study Aquatic Flowering Plants with him and also would go to him at UMBS when I had a specimen I couldnt identify. I remember bringing him a piece of a plant (all there was) with no flower and he said "with no flower how do you expect me to ID it" and I responded if there had been a flower I could have keyed it out myself - you taught me!.

I recently purchased a copy of the very difficult to get Hutchison volumes 'Families of Flowering Plants' from an online bookstore, and had them shipped to the Bangkok Forestry Herbarium where I am doing some volunteer identification work. Inside the cover I found a label with the name Edward G. Voss, so I googled him and found your blog. I feel privileged to be in possession of a set of botanical books from such an esteemed botanist. Thanks for your blog and I can assure all friends of Dr Voss that his books will be well-used and cared for for years to come! Knowing who the previous owner was and how loved he obviously was adds a lot to my appreciation of these fantastic books from the 1950s!