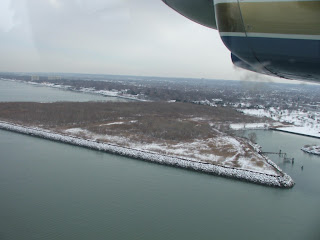 The 88 wedge-shaped acres that comprise Cleveland Lakefront Nature Preserve juts into Lake Erie, just east of downtown Cleveland. Although the site is entirely artificial - created originally as a dredge spoil impoundment - it has morphed into a fabulous refugia for wildlife. I've spent many an hour on that peninsula, and have seen many an interesting bird there. Back in the day, when we knew the place as "Gordon Park", and it was still muddy unconsolidated spoil, CLNP was a magnet for shorebirds. I saw my first Ohio Piping Plover there, and Ohio's first state record Sharp-tailed Sandpiper, way back in 1984.

For many years, Cleveland conservationists have labored tirelessly to see this all too rare chunk of lakefront habitat protected for birds and nature. They've finally won the battle, with the official opening of CLNP to the public yesterday. Read the Cleveland Plain Dealer article about the grand opening HERE.


An Ohio Ornithological Society field trip into the wilds of the CLNP back in October 2010. We saw lots of birds, including hundreds of sparrows of many species. This site is a fabled migratory stopover site for the little brown jobs, including rare Le Conte's and Nelson's sparrows. I once saw, by my estimation, some 500 White-crowned Sparrows drop into CLNP at dawn's first light a few years back, the birds having just made the southbound Lake Erie crossing. Until yesterday, accessing CLNP was a bit of a hassle and required advance permission. No more; interested birders can just show up and have at it.

Congratulations to everyone who was involved in the protection of the Cleveland Lakefront Nature Preserve!
at February 07, 2012