I received an interesting email from Tim Tolford yesterday. He saw that I would be at the Amish Bird Symposium in Adams County this coming Saturday, and that my talk subject is hummingbirds. So, Tim piped along a really cool photo of a Ruby-throated Hummingbird that he caught and banded in 2010. This got me thinking about the tremendous diversity of avifauna, and just how tiny hummingbirds really are.

By the way, the Amish Bird Symposium is always a blast, and you may still be able to get in. CLICK HERE.

Contrast that beastly big bird with a Ruby-throated Hummingbird, which tapes out at 3.75 inches, has a wingspan of 4.5 inches, and weighs all of 3.2 grams. It would require nearly 8.5 hummingbirds, arranged from bill to tail, to equal the body length of the eagle. Whoop-de-do. That's not a staggering factoid. The line of hummers would have to be expanded to 18 birds to bridge the eagle's wingspan - a bit more impressive but still somewhat of a yawner comparofactoid.

But wait - what about weight? This is where comparisons between these two birds get mind-boggling. You would need a pile of 2,128 Ruby-throated Hummingbirds to equalize the scales, if this Bald Eagle was the counterbalance. That is a LOT of hummingbirds! Considering that Ohio's total breeding population of hummingbirds is probably about 50,000 birds, we only have enough hummingbirds in this state to make 23.5 Bald Eagles. 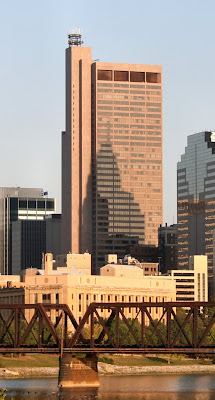 So, let's say you had your hands on that pile of 2,128 eagle-equaling hummingbirds, and placed them in a line, tail to bill. Then you pulled out the tape measure and paced off the row of hummingbirds. You'd have to step off 665 feet before you reached the last bird!

That skyscraper above is the James A. Rhodes State Office Tower, the tallest building in my hometown of Columbus, Ohio. Our string of hummingbirds, if dangled from a helicopter, would have to be held at a height 36 feet HIGHER than the 629 foot tall Rhodes Tower before the last bird would touch the ground.

Wee though they may be, we'd all be in mortal peril if these hummingbirds were the size of eagles. The little nectar-sippers are tough as nails and absolutely fearless. I have no doubt whatsoever that if a Bald Eagle rudely impinged on a hummingbird's turf, the hummer would terrorize the comparatively elephantine and sluggish raptor. And in the world of avian aeronautics, nothing holds a candle to hummingbirds in the stunt-flying department - certainly not an eagle.
at February 28, 2012

Thrilling! We have a Costa's out here on the coast which isn't much bigger than a Ruby throat.