What a week of travels this has been. Just returned from the shores of Lake Erie - Ohio's north coast - and I'm off to Adams County at the crack of dawn tomorrow. The latter is an Ohio River county and about as far away as one can get in from Lake Erie and Kelleys Island and remain in Ohio.
Anyway, it must be a good year for robber flies. These predatory carnivores are the falcons of the fly world, and even the smallest species are impressive. The giant ones are downright scary. I've gotten several photos of the following brute sent to me in the past few weeks. People understandably want to know the name of such a barbaric looking insect. In case you, too, have seen the awesome red-footed cannibal fly, then perhaps this post will be of help to you. 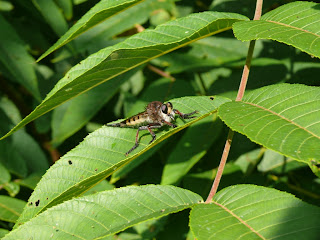 A female red-footed cannibal fly, Promachus hinei, lurks on walnut foliage. I found her this morning at the Blue Heron Reserve in Sandusky County. She had just mated, and the sight of two of the beasts coupled and flying about was impressive to say the least. Or scary, depending on your perspective. I was unable to get the lens on them in time to document their amorous behavior. But after all was done and the male went off to smoke a cigarette or whatever it is that male cannibal flies do in the immediate aftermath of a conquest, she settled nicely. 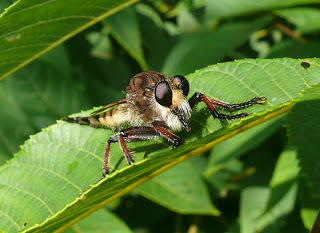 Cannibal flies are not daunted by much. I see a few of them most years and always try for photos. As often as not, the bug will allow very close approach. I was using my little Panasonic Lumix for these shots and had the lens as close it would go - maybe within a foot or two. 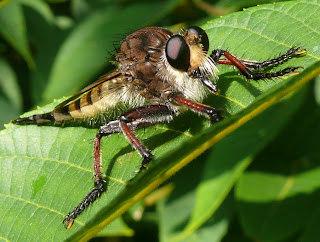 Inscrutable and intimidating, I suspect that whatever genes cause fear are absent in red-footed cannibal flies. These things bring down remarkably large prey; animals that few if any other predatory  insects could capture. I have seen photos of cannibal flies with annual cicadas. Hummingbirds. Large bumblebees. Other big robber flies. The cannibal fly sits in wait, as this one is doing, and waits for prey to wander by. Nothing that isn't at least twice the fly's size is safe, if the fly is hungry and wants a meal.

Like other robber flies, the cannibal fly dispatches its victim with a jab from its syringelike proboscis. Toxins rapidly paralyze the prey, and other chemicals rapidly turn the hapless creature's insides to slush. The fearsome cannibal fly then sucks its insides out, just as you would slurp up a milkshake through a drinking straw.

Be thankful these insects aren't the size of Sandhill Cranes.
at August 19, 2011

Good to know. I have been seeing lots of them and wondered what they were up to. The Kids are going to love the last part. Thanks.

I saw one of these in my yard the past few days. It scared everyone so much I shot him with a bb gun.

I live in Western side of Wisconsin, and this fella landed on my windshield with a tasty snack of a housefly it had impaled! As I've been reading up on them I see they aren't common to be in this area. Therefore it sent me on a quest to find out what the heck this was! I know the weather has been unusual this year so I'm assuming he must have gotten off course, unless they are moving more this way permanently! Very interesting though!