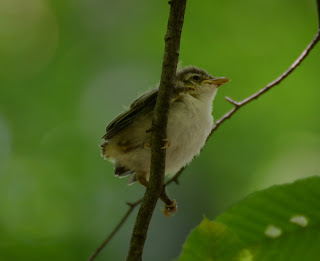 On a recent trip into a nice patch of older-growth forest, our party was alerted to this newly fledged Red-eyed Vireo by its constant cries for food. It was free-flying - barely - but still dependent upon its parents for food. Note the lack of a tail. Apparently those are the last feathers to fully grow in on Red-eyed Vireos, and the chicks have a comically rotund appearance as a result. 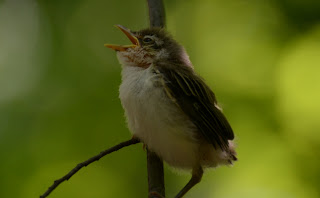 It is shouting "caterpillar! caterpillar!". Red-eyed Vireos are probably the most numerous species of Neotropical bird that breeds in the vast eastern deciduous forest, and they are consummate caterpillar hawks. Watch one feed sometime, assuming you can find it high in the canopy where they normally reside. The vireo is sluggish and systematic, deliberately moving from branch to branch and carefully inspecting each leaf, especially the undersides. No caterpillar is safe when a vireo is around. 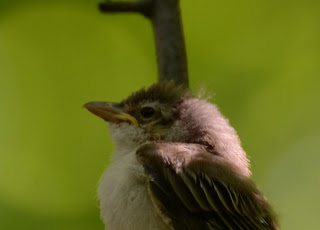 Click the pic and look at that bill. Even on this youngster we can see the hooked tip that makes the vireo an adept at snagging meaty caterpillars. That bill also reveals its close relationship to the shrikes, which are well-known predatory songbirds. In fact, in the tropics there is a group of birds known as shrike-vireos.

Partners in Flight estimates that about 990,000 Red-eyed Vireos breed in Ohio. The amount of caterpillars the collective population harvests in a day is staggering, almost impossible to fathom. You can do the math. If each vireo captures a caterpillar, say, every ten minutes, and for at least 12 hours a day, well, that's a TON of little wriggling bags of goo in just one day. It serves to reinforce just how important caterpillars are to the ecology of forests.

Map: Cornell Lab of Ornithology
Our Red-eyed Vireos don't remain in Ohio year-round, and if all goes well for the fledgling in my photos, it will find itself deep in South America within a few months. The Red-eyed Vireo is but a part of legions of Neotropical birds that are produced in Ohio's forests that go on to become important spokes in the wheel of tropical forest ecology. Birds, like no other group of animals, link the Americas in a fantastic web of interwoven ecological dependence.
at August 10, 2011

I found a couple of these early in the summer in a ditch at the side of our road, peeping for a meal. They were about the cutest things I have ever seen. Just one among a number of great finds during time spent surveying for OBBA II this summer!