A few of us had a fantastic field excursion yesterday, which included observation of one of our rarest orchids, an incredible caterpillar, and other noteworthy finds. I've got some nice photos of all of that, but first, and hot off the presses, is something that you've likely got in your own backyard. 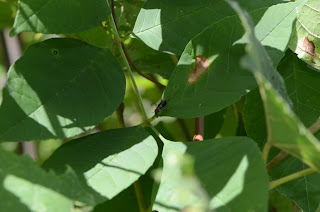 My office is in a very urbanized part of Columbus, but the compound includes a patch of "wildness" in the form of a small wetland surrounded by some trees and brush. For a while now, I've noticed the vocalizations of myriad tiny crickets known as trigs emanating from the bushes. So today, I hauled the camera rig out there and in short order found one of these cool little crickets.

The photo above offers a size scale. Those are the leaflets of a white ash, Fraxinus americana, and our little trig can be seen at the base of the center right leaflet. Not much to it. 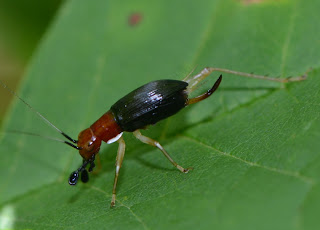 Move in close and the trig becomes an animal of remarkable beauty. There are perhaps a dozen species of trigs in eastern North America, with most of them being found in Florida and the extreme southeast. Ohio harbors perhaps a half-dozen, but two species are widespread and ubiquitous: Say's trig, Anaxipha exigua, and our featured species, the aptly named handsome trig, Phyllopalpus pulchellus. 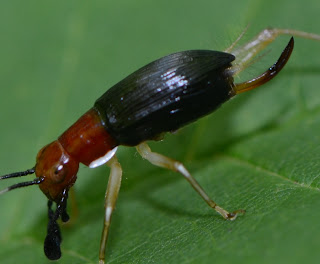 Up close and seen well, the handsome trig is like a miniature work of art. The reddish head and thorax contrasts sharply with the glossy black abdomen. The creature is shiny, as if it has been freshly shellacked. This animal is a female, as evidenced by that scimitar-shaped ovipositor jutting from its posterior, so it was not one of the singers that originally drew my attention - only males "sing".

The two paddle-tipped appendages affixed to her snout are called palps, and handsome trigs are constantly checking the substrate with them. In fact, the scientific name translated means beautiful leaf feeler in reference to its habit of patting the leaves with those curious appendages. 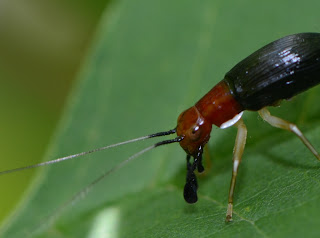 Like nearly all of their Orthopteran brethren - the singing insects - male trigs deliver song by rapidly rubbing their wings together. This species is noted for often singing from the depths of rolled leaves, which act as an echo chamber and amplify the volume of their sound. Handsome trigs create a rather dry, rattling rapid trill and they sing throughout the day. The song can be remarkably loud for such a miniscule creature: when I found the female in these photos, I had been triangulating on a male in song, and at certain points its trill was quite loud indeed.

CLICK HERE to hear the handsome trig, courtesy of the wonderful Songs of Insects website. Then venture into your local patch and see if you can find some of these gorgeous crickets.
at August 08, 2011

Terrific post Jim. Smashing photos too. You are getting very good with the new camera set up.
I am so glad that you linked to the song. It is wonderful to have people know what these amazing creatures sounds like.
Wil

Thanks for making that wonderful website available to us all, Wil! And for all of your recordings of those songs. I'll look forward to seeing you in a few weeks in Adams County.

Saw these for the first time today and immediately recognized them tanks to your blog keep up the great posts on these obscure but interesting guys.

This post was great Jim. It helped us figure out a P. pulchellus recently posted to iNaturalist: http://www.inaturalist.org/observations/108427