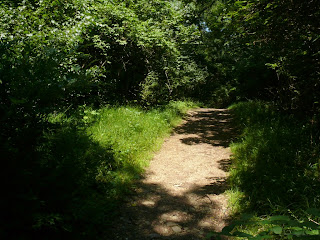 A sunny opening along a woodland trail - perfect habitat for one of our coolest, tiniest insects, the gnat-ogre. I encountered quite a few of these barely visible beasts the other day, including several that were hunting in this very glade. 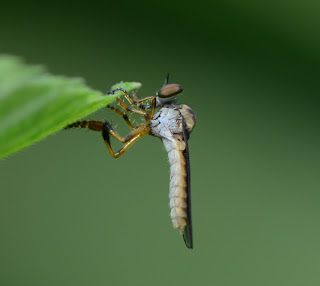 Aptly named, gnat-ogres are miniature robber flies, and every bit as carnivorous as their larger, more visible brethren. You've just got to look closely to see them. The gnat-ogre pictured above would be measured in millimeters. They are so small that a person would likely dismiss them as gnats or perhaps extremely tiny flower flies. With the naked eye, they are scarcely visible unless one happens to be closely studying the area in which gnat-ogres have staked out. To get these photos, I was using a heavy-duty macro lens, flash, and a tripod. Fortunately, gnat-ogres are fearless and will allow very close approach. 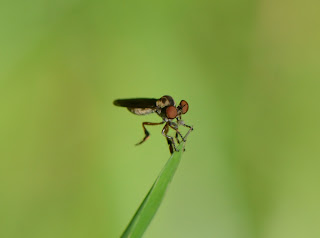 This blade of grass offers a size scale. The gnat-ogre typically hunts from a conspicuous perch such as the tip of a plant, and it is this habit that first drew my eye to them. From five or ten feet, it was hard to make out any details, but I noticed that the little bugs were darting out in yo-yo flights in the manner of a flycatcher such as an Eastern Wood-Pewee. I figured that whatever they were, they were predators that were actively hunting and moved in for closer study. My inaugural encounter with gnat-ogres occurred a few years ago and now I watch for them wherever I go. And finally, I've got camera gear that is powerful enough to pull them in and reveal their charms. 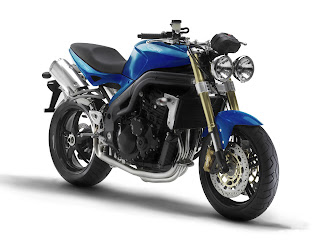 This is a bug-eyed Triumph Speed Triple motorcycle. They are very cool British-made three cyclinder bikes, and one has to wonder what inspired some of the design influence. Possibly the engineers were hip to gnat-ogres. Look at the bike closely, then scroll back up to the gnat-ogre shot. Perhaps in a subconscious nod to my like of gnat-ogres, I nearly bought a Speed Triple last year, but it was my love of twin cyclinder bikes and the slight goofiness of a three-cylinder motor that tipped me to getting a Ducati Monster 1100S - my fourth consecutive two-cylinder sport bike. 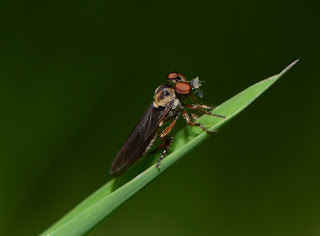 Anyway, here we see the gnat-ogre living up to its name. This one has just captured some little insect so small that we'd probably never notice it on its own merits. And that's what gnat-ogres do - dart out after extremely miniscule bugs that happen past, or sometimes rather clumsily fly through foliage picking insects from leaves in the manner of a damselfly. They are not the powerful, purposeful flyers of their larger robberfly brethren, but have a somewhat weak and fluttery flight. 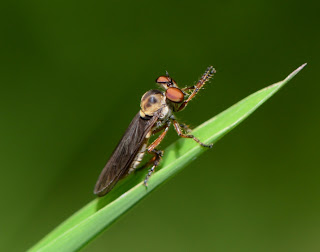 The same gnat-ogre grooms fastidiously after consuming its meal, like a cat. Say what you will about gnat-ogres but if they are nothing else, they are neat.

Now is peak season for these cool little insects. Next time you are out and about, watch for gnat-ogres.
at August 01, 2011

Wonderful post on one of my favorites insects for 2011, I probably have 100 photos of one of them in my backyard. This individual has gotten so used to me it never moves when I approach. It even hunts and returns to the same perch on a dead limb when I am there. The eyes on these flies are amazing up close, just like jeweled works of art.

Looking forward to your presentation and hopefully being able to meet you at MBS2011!

Wow! What an amazing creature. I've been studying entomology this summer and love the subject. This little guy is a real work of art and just beautiful. I've developed a real respect and admiration for the insect world. I'll have to learn more about these little guys!

Thaks for the comments - glad you emjoyed the gnat-ogre!