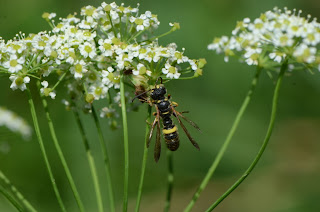 Not far from where I made some of the gnat-ogre photos featured in the previous post, I noticed this small wasp staying unnaturally still. I'm wise enough to the ways of elfin flower-lurking killers to know that the wasp wsn't just hanging out there in order to give me and my Nikon some excellent photo ops. Something had nabbed it. 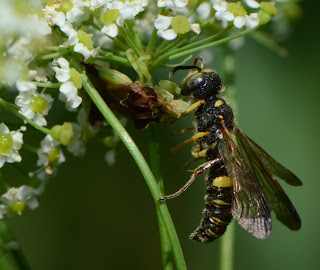 Moving in on the scene, it immediately became clear what had happened. The little wasp - I don't know the species but if anyone does please let me know - had dropped in to sip nectar from the flowers of this cowbane, Oxypolis rigidior. Cowbane and other native parsleys, with their flower-packed umbels, attract many pollinating insects such as this wasp.

And ambush bugs know all about nectar-seeking bugs' predilection for visiting flowers such as these. Like chitinous little thugs, the ambush bugs work their way into the depths of the blossoms, and blend extraordinarily well. And wait. When something like this wasp bubles into range, the ambush bug pounces. Look closely. 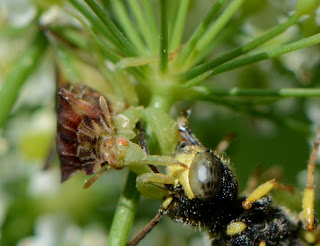 The tiny ambush bug, Phymata pennsylvanica, quite actively moved its prey about with Popeyeish forelegs, tapping various parts of the victim's body with its syringe-like proboscis. The ambush bug had used that proboscis to deliver a sharp penetrating jab to the wasp, and pipe in debilitating neurotoxins that quickly immobilized the much larger prey. The wasp was still twitching a bit, but barely. Other chemicals produced by the ambush bug and introduced into the wasp will liquefy its innards, allowing the ambush bug to suck out the slushy protein-rich contents. 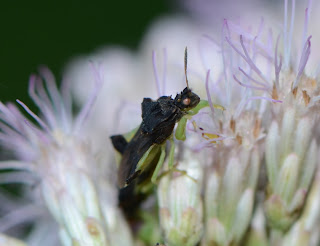 A bit further down the trail, I stumbled on another ambush bug that was apparently on the move and more or less in the open. It is truly a strange insect, gargoyle-like and extremely dangerous. Predators such as these make life at the flower patch quite risky for the nectar hunters.
at August 02, 2011

What a great find!

Thanks! Never know what you'll find amongst the flowers!