I promise to lay low on the caterpillar/moth/butterfly stuff for a while, but the following pics and story is just too cool not to share.

Thanks to David Hughes and Laura Stalder for discovering this amazing creature, taking pains to help ensure its survival, and sharing their photos with us. 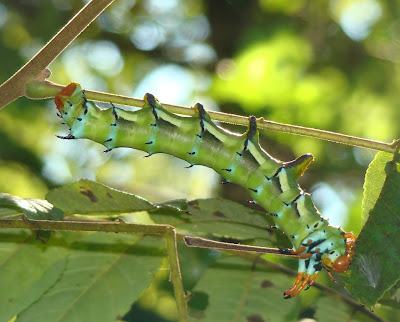 The incredible Hickory Horned Devil, probably the most spectacular caterpillar in the eastern United States. These things are mammoth; the size of a hotdog. While they look fearsome and dangerous, Hickory Horned Devils are all bark and no bite. Those intimidating horns don't inject poison, the thing can't bite, and if you can overcome the fear factor, they're easy and safe to handle.

Hickory Horned Devils spend their time high in trees, vaccuuming up foliage like an over-active paper shredder. Thus, they're hard to spot, and I've only seen one. I was with a moth expert, and he actually spotted the devil's frass, or droppings, on the ground and then looked up and saw the cat up in the tree. 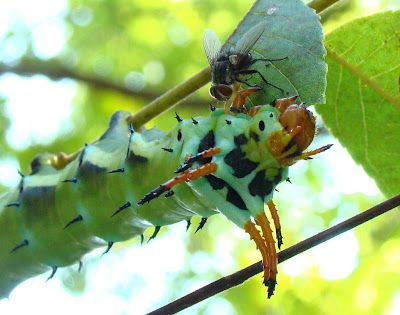 While David and Laura watched the devil happily chowing on walnut leaves, other creatures with much more malicious intent were also watching. Here, a tachinid fly moves in to investigate the caterpillar. There are scores of species of tachinids, and some look much like house flies, as this one does. But they've all got long stiff bristles, on their abdomen, which give them a distinctive appearance.

If you are a caterpillar, you don't want to be stalked by one of these flies. Even though the horned devil outmasses this little fly by a factor of 100 or more, the tiny tachinid spells doom. If you want to see the ultimate result of a tachinid's handiwork, GO HERE. 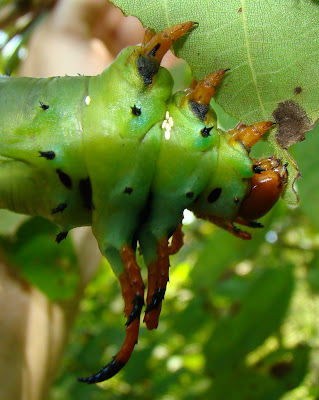 As David and Laura watched, the tachinid fly extended a long ovipositor (an appendage for laying eggs) and began sticking small, gluey eggs to the Hickory Horned Devil. Her spawn is visible in the above photo: six little white dots. Left to their own devices, those eggs would quickly hatch and the miniscule fly larvae would promptly burrow into the caterpillar's tissue. Once inside, they would commence eating it alive, cleverly avoiding the most vital of tissues, thus keeping their victim alive for as long as possible. Eventually, like a scene from a sci-fi horror flick, the now much larger fly grubs would burst from the body, leaving behind little more than a hollowed out husk.
This is the world's luckiest Hickory Horned Devil. Dave and Laura knew what was going on, and fetched a pair of tweezers. With the precision of a skilled surgeon, they carefully plucked the eggs of death from the devil's body, and hopefully it'll survive to pupate and become one of our flashiest moths.

Hickory Horned Devils grow up to become one of these, a Royal Walnut Moth, Citheronia regalis. I took this shot a few years back at the amazing McMoth's in West Jefferson, Ohio. Royal Walnut Moths are just about as impressive as their caterpillar - massive hand-sized things with a furry body the size of a roll of nickels.
Thanks to David and Laura, not only for sharing their amazing photos with us, but also for their caterpillar rescue operation that will hopefully result in another much-needed Royal Walnut Moth.
at September 03, 2010

That's my kind of meddling! Wonderful post. I just spent some time catching up on your blog, Jim, and it was time well spent. I always learn here. You really ought to think about a blook, you know?

This might be your coolest post ever!Really, the size of a hot dog? Love reading about insects. Gave your URL to an insectophile student yesterday.

Thanks, Jules. A book? Hmmm... I will practice writing. I have always wanted to do a book...

Coolest post EVER, Deb! Now that is COOL! But how could it not be when a hotdog-sized caterpillar is the star?

Yea for Dave and Laura! My heros!
And thanks Jim, for posting this great story about "Lucky" the caterpillar.

The next time I come across one of these, I really will try to overcome the fear factor, but the last time I encountered one, I was just too freaked out by those spikes and had to hold it on a piece of paper!! Yup, they sure are big. I hope someday to see in-person the moth they grow up to be. Great post, and great heroics on the part of David and Laura.

I came across my first walnut moth this spring and she was fantastic...almost covered my hand!
Never have seen the caterpillars, though...thanks!

I have several great photos of this moth taken a few nights ago but I can't figure out how to post them to your blog. If you want me to send them to you by email, just let me know your email address. Thanks-
Catherine