Last Saturday was the Wooster Christmas Bird Count, organized by Roger Troutman. He's been at it a while, like 50 years or so. It's an interesting count circle, containing Killbuck and Funk Bottoms wildlife areas among other good bird-seeking spots.
My area included what is easily the most interesting botanical feature in the count circle, but hey, this isn't the Christmas Plant Count. Nonetheless, I made a point of walking through the swamp woods that buffer Brown's Lake Bog, and on into the bog. As any seasoned birder knows, you'll find more birds when you are out and about on foot, when all of your senses can come into play. In fact, just south of the bog, we were walking McFadden Road when I heard approaching geese. In addition to the Canadas, the high-pitched tinny calls of Cackling Geese rose from the pack, and moments later three of these pint-sized honkers passed over with a number of Canada Geese. They really sound different, and we would have never found them from the confines of an automobile.
On to the bog... 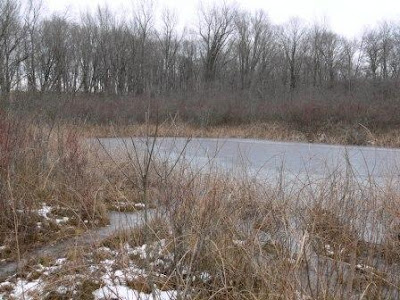 Brown's Lake Bog doesn't look like much in winter. This is the bog's core, with the deep pool of open water frozen over. A few thousand years ago, the open water would have been far more expansive. Over time, nature reclaims these kettle lakes with vegetation, and different plant communities form in concentric bands around the water. The outermost zones are swamp forest; inside of that are shrub zones; and ringing the water is the most interesting habitat, open bog mat. 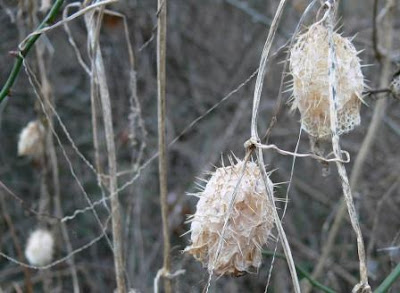 Not a bog plant, but nonetheless interesting. We saw the old pods of this conspicuous plant nearby. It's Wild Cucumber, Echinocystis lobata. The spiny fruit are quite distinctive, as is its vining habitat. 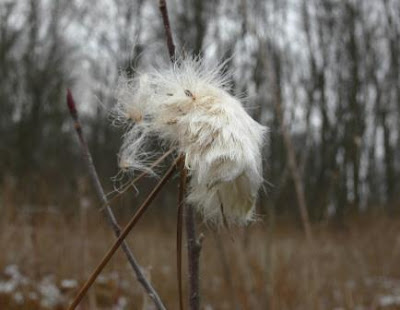 Here's a true bog plant, Tawny Cottongrass, Eriophorum virginicum. Quite the rarity in Ohio, it is only found in bogs. The cotton candy-like tufts from the inflorescences persist well into winter, and one might argue that the plant looks at its best this time of year. Long, silky bristles attached to the achenes (seeds) create the showy tufts. The genus Eriophorum is quite northern; only two species occur this far south but there are plenty of them in the arctic. 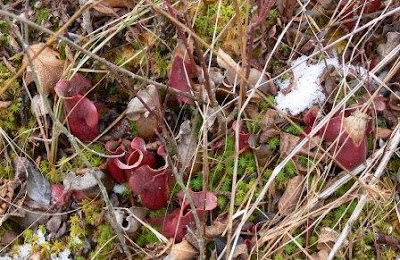 To many plant enthusiasts, this is the creme de la creme of bog plants. Northern Pitcher-plant, Sarracenia purpurea, still looks good in the winter. The anthocyanins (colored pigments) in the leaves become bolder after the growing season, creating brilliant reddish-purple splashes amongst the soft lime-green beds of Sphagnum moss. 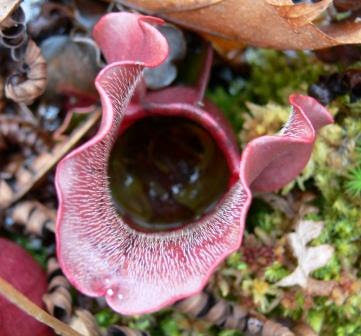 Straight down the gullet of a pitcher. This is a carnivorous plant, one of few true plant carnivores in Ohio. These modified leaves are effective traps, and enable the plant to capture insects; effective sources of nitrogen and protein. In the bottom of the leaf pools rainwater, injected with chemicals produced by the plant that reduce bouyancy and speed digestion. Basically, if you are a bug and fall in, it will be hard to float, and your soft parts won't last long. Those stiff, whitish hairs lining the throat are retrorsely directed; that is, they point down. That's great for the bug walking into the trap, but very bad for the bug that wises up and decides to bail. Quite hard going against those hairs, you know.
After the brief botanical interlude, it was back to tallying birds. We didn't find anything to top the Cackling Geese, but a Short-eared Owl was nice, as were two American Pipits.
at December 25, 2007

Believe I may have encountered my first pitcher plant in NE Ohio. Would love to share the photo with you.