This odd plant would seem a seasonally apropos topic, although seeking strange plants wasn't my number one priority today. Nope, birds were the target today - it was the running of the re-scheduled Beaver Christmas Bird Count, and I went down to the hill country to cover my favorite CBC area. I've been doing the same Jackson County patch since the inception of this count, in the early 1990's, I believe. My turf contains a real diversity of habitats, and is very rural. It's great to be able to stop nearly anywhere, as traffic is nearly non-existent.
Today, Blue Jays, which are truly a botanical bird, ruled. They were everywhere; the Numero Uno species. This abundance of Bluish Screamers undoubtedly speaks to the lush acorn crop, and the woods in my area are mostly upland oak-hickory that produced plenty of Blue Jay bounty. There were other goodies, too, chief among them a Wilson's Snipe in a wet pasture that often has them if conditions have been mild enough. Also had three Hermit Thrushes, a shy species that winters here in Ohio in far greater numbers than is widely known, particularly in the state's southern reaches.
Anyway, while traveling one of the back roads I came upon one of my favorite trees in Ohio. It is a massive White Oak, Quercus alba, all by its lonesome in a mowed pasture. I think I first saw this tree 10 or 12 years ago while passing through the area with Dave Minney, and it's good to renew its acquaintance again each year when doing the Beaver CBC. This gnarled old beast is copiously festooned with Mistletoe, Phoradendron leucarpum. 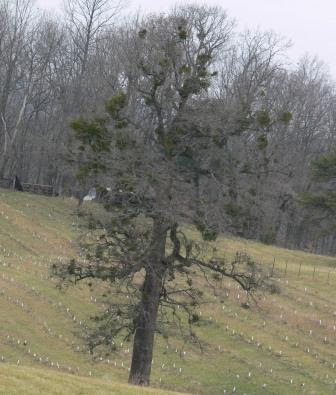 From head to toe, this grand old oak is covered with orbicular masses of Mistletoe, which generally is not a common plant in Ohio. Mistletoe-seekers will want to travel to the Ohio River Valley, as the vast majority of this arboreal plant is found right along the banks of the Ohio River, which pretty much marks the northern limits of its range. This tree is a good 30 miles north of the river, and Mistletoe gets pretty scarce this far from our largest stream. The massive clusters of this evergreen epiphyte lend the tree a strange, diseased look, and I always wonder if the landowners know what it is. I imagine so; you just can't miss the "toe" and anyone would wonder what it is and probably make the effort to find out its identity. In fact, maybe they want more. Judging by all of the newly planted seedling protected by "deer tubes", they've planted a lot more trees in the pasture since my last visit. 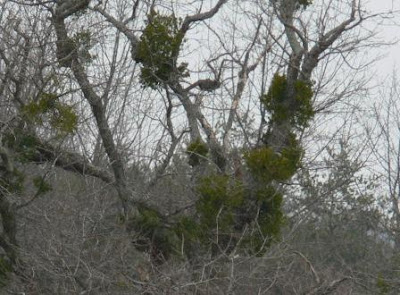 A zoomed in view of the Mistletoe plants. These are some healthy plants, for sure. This is the very species that has been popularized in Yuletime tradition. Not the easiest thing to collect, I can tell you. It's normally just too high up in the trees. One effective method that I can't publicly endorse is to shoot it from the boughs with a shotgun. I've heard that works well. The fleshy succulent green leaves grow right from the trunks and branches, where they are attached by specialized roots known as haustoria. Mistletoe blooms quite late - mid-November or even into December, although noticing the flowers is hard in the wild. The seeds are quite sticky, and birds are undoubtedly the primary dispersers.
I wish this mistletoe oak well, and hope to visit it for many years to come.
at December 30, 2007

We also noticed the swarm of Blue Jays everywhere in our territory adjacent to yours. This was our highest count species with a total of 127. American Crow came in second with 74 then Carolina Chickadee at 47. Interesting stuff....