Josh Dyer, a naturalist with the Crawford County Park District, saw my recent post about Cathy Herm's Pine Warbler in Wooster, and sent along one of his own. Josh reports that it has been hitting the feeders at the Lowe-Volk Park Nature Center since November 30th. 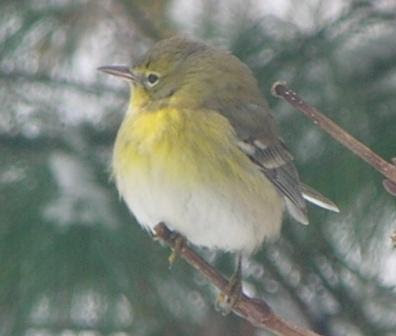 Tough Crawford County Pine Warbler. Probably not too many winter records of this species from the county that brought us the Bucyrus Bratwurst Festival. Maybe none, for that matter. In fact, I wonder why it would show up there as a winterer, when the closest place that they breed is probably Mohican State Forest, which probably does have occasional wintering Pine Warblers. But, there's plenty of big pines and hemlocks at Mohican, which is your best bet for finding them, even in winter. Crawford County is distinctly un-Mohican-like in regards to habitat. But, it looks like the blurry green in the background of Josh's photo could be the boughs of white pine, so maybe there's some nice conifers at this park that lured it in. 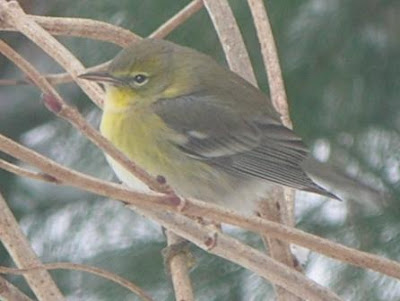 I wish I had time to pore over the records, and analyze all of the winter warbler reports from Ohio and nearby states. There seems to be no question that they are increasing. The bird above isn't too surprising, but Ovenbirds, Louisana Waterthrushes, Northern Parulas and the like are. Among the first and most obvious responders to changes wrought by global warming will be things with wings. In the case of warblers, we may see more lingering into winter far north of their usual haunts. It doesn't take much of a temperature increase to keep insects alive, and provide food, along with the feeding stations. I think we are already seeing some interesting and new responses among butterflies and dragonflies as conditions warm.

Thanks for sharing your Pine Warbler with us, Josh.

I'm wondering if I haven't seen this bird mistaking it for a Goldfinch in winter color. I will look closer next time.