Strange place for an owl...

This was THE YEAR for Northern Saw-whet Owls. Fall 2007 saw unprecendented numbers of the tiny hooters moving south, no doubt because favored prey such as Red-backed Voles had crashed in the north woods. Probably somewhere on the order of 200 were reported from Ohio between mid-October and now, which surely crushes any existing previous tallies. Much of the total is attributable to two banding stations, one in Chillicothe and Tom Bartlett's efforts on Kelleys Island.

Bruce Peterjohn, in his book The Birds of Ohio (2001) states "Their fall migration has never been well defined in Ohio". Probably true at the time Bruce penned those words, but it shows how fast our knowledge of a species can evolve. Almost entirely because of banding studies, we are learning much more of the southward movements of these furtive hooters.

But, surprises always await, and Laurie Boylan sent along a neat one recently. Her friend Audrey Dragony was exiting the Diamond Building in downtown Cleveland - at Superior and 12th - on October 27th, about 11:30 pm, and noticed a small brown lump on the sidewalk. A closer look revealed an apparently unhurt Northern Saw-whet Owl sitting like a little avian panhandler. Audrey had her camera - good work, Audrey! - and snapped the following photo. 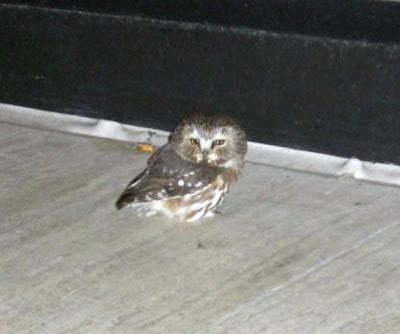 "Hey bud, gotta bit of change for an owl down on his luck" At least he didn't have a sign saying "Owl will work for food - help a hooter in need"!

Audrey's sighting coincides with the beginning of saw-whet migration, and it's appearance in the cement jungle of downtown Cleveland isn't as odd as it may seem. Being hard on the shores of Lake Erie, many migrant birds crossing the lake hit shore here, and filter through the inner city. I've seen tiny postage-stamp downtown parks in Cleveland swarming with migrants in fall just after dawn.

Hopefully this saw-whet overcame its disorientation, picked up and moved on. It probably did. Thanks to Audrey and Laurie for sharing this interesting experience with us!