Over on the OOS website, Mike Busam has posted some interesting compilations from Roger Troutman's epic tome documenting Ohio's history of the venerable Christmas Bird Counts. Check it out right here. You'll learn fascinating tidbits such as Downy Woodpecker and Northern Cardinal are the all-time leading native species found on Ohio counts, and that the 1956 Buckeye Lake CBC set the record of 96 species, which the Millersburg count tied much later, in 1995. It'll be a hard record to beat, but there are some other contenders. For instance, the Toledo CBC - which always stands out in my mind due to the amazing 112 Eastern Screech-Owls they tallied in 1981 - had 90 species last year.

Speaking of that 1956 Buckeye Lake CBC, the legendary Milton Trautman ws no doubt a participant. And Milt's name is on the list of the 78 people that have participated in at least 50 counts. I really thank Roger for assembling that, and Mike posted it on the website. Mainly because looking through those names allowed me to wax nostalgic and think back on many counts shared with many of those individuals. Many of whom are still out and active and doing CBC's to add to their total. At #1 is Ernie Limes at 246! That's a staggering number, and a benchmark that will be very tough to beat. I've done a far number, weighing in with 69, but I'd have to do at least six a year for 30 years to eclipse Ernie's amazing milestone. Don't see anyone on the horizon to threaten that record. By the way, next time you are on the Magee Marsh boardwalk, check out the plaque along the trail dedicated to Ernie and featuring his picture.

Skim through the list and you'll recognize many of the names. I did, and it was good to reflect back on field experiences with many of them. 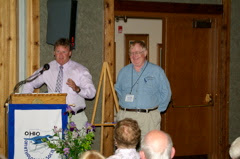 Photo by Ernie Cornelius
Roger Troutman receiving the OOS Outstanding Volunteerism Award for his work with Christmas Bird Counts and numerous other projects over the years, given at our May 2007 annual conference at Mohican State Park. Thanks for everything, Roger!