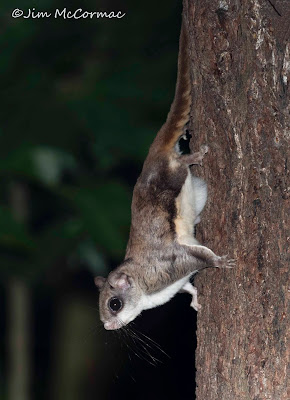 A southern flying squirrel, Glaucomys volans, pauses nuthatch-like, headed down a tree trunk. Last year, about this time, I received an invite from Roman Mast to come to his place in Knox County to see an extraordinary assemblage of these furry paragliders. You can read about that trip RIGHT HERE, and it explains a bit of Roman's relationship with the squirrels and why so many visit his yard.

Well, Round II for me and the squirrels was last Wednesday. I got word from Roman that numbers were building - June is the peak month - so off I went to see my friend and his amazing mammals. Once there, we didn't have to wait long. Flying squirrels are strictly nocturnal, but don't wait very long to emerge once the sun has fully set. I asked Roman when the first squirrel would appear and he said "9:13". Darned if I didn't see the first shadowy movement of a squirrel high in the trees at precisely that time, and by 9:15 some animals were down to the feeders. 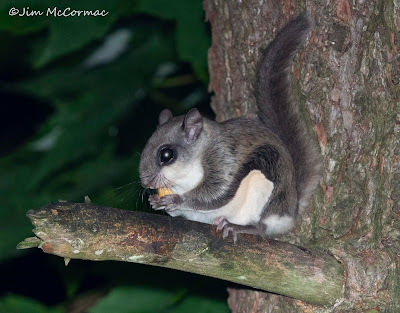 A flyer in a rare moment of repose, and it's only still because it's eating a kernel of cracked corn. These little speedsters race about at the speed of light, maneuvering up and around trunks and branches at speeds that make your head spin. It's as if they have Velcro for paw pads.

That isn't to say they always get it right. Squabbles between apparent alphas and lesser squirrels are frequent, and in some cases physical tussles lead to a squirrel falling to the ground from lofty heights. We saw this several times last night. It reminded me of someone with a dud parachute that sort of slows the descent, but they still hit the ground with a good thunk. Apparently there isn't time for the squirrel to spread its patagium (the loose flap of tissue between the legs that forms a sail when stretched taut) and catch enough air to sail out of the fall. But each time, utterly unfazed, the squirrel would bounce right up and back into the tree.

Here's a brief video of a few flying squirrels working the primary feeding tree. Turn your volume up to hear a nice symphony of singing gray treefrogs.

Thanks to Roman for so graciously sharing the squirrels with me, and many others.