Nature: Longnose gar a sight to behold in waterways across Ohio 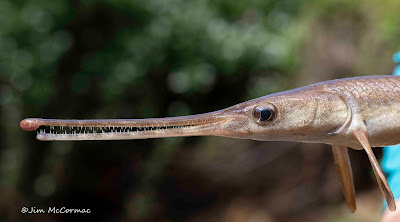 The business end of a longnose gar/Jim McCormac

UPDATE: Following publication of this column in this morning's Dispatch, artist Juliet Mullett sent me a beautiful illustration that she created, of a longnose gar. Very few artists have chosen this fish as a subject, I'm sure. I've posted Juliet's artwork at the end of this post.

In the early years of my career with the Ohio Department of Natural Resources, I was lucky to spend much time afield serving as labor for two of the state’s best ichthyologists. Dan Rice was the zoologist for DNR’s Division of Natural Areas and Preserves, which manages Ohio’s system of state nature preserves.

Often accompanying us on aquatic expeditions was Ted Cavender, now a professor emeritus at Ohio State University. Cavender is the man when it comes to fisheries expertise. We went all over the state, surveying streams of all sizes. For me, it was a tremendous immersion into the underwater world and my interest in aquatic ecosystems has never waned.

Of all the fish we captured during these surveys, the longnose gar (Lepisosteus osseus) was probably my favorite. Gar are fascinating in form, behavior and their ancient lineage.

Thus, it was a treat to see a longnose gar again, up close and personal. An aquatic foray on May 25 was spearheaded by fisheries biologist Kelly Capuzzi of the Ohio EPA and Amy Mackey, the Raccoon Creek Watershed Coordinator. We visited Rocky Fork, a small stream in western Scioto County.

This was purely an educational trip, and strictly catch-and-release fishing. Our main target was a gorgeous little fish known as the scarlet shiner. We found a few males, resplendent with fins of orange-red. Longear sunfish, greenside darter, rock bass, northern hogsucker, golden redhorse and other interesting species were captured.

But best of all — to me, at least — was when Capuzzi and Mackey shouted “gar!” and held the fish up for us to see. Perhaps the only person more excited than I was photographer Sam James’ 3-year-old daughter, Josephine. She stared goggle-eyed at the primitive fish with the big beak.

The gar was decent-sized at about 2 feet, but they can get much bigger. The largest Ohio specimen weighed 25 pounds and taped out at 4 feet, 5 inches.

It’s easy to sense the primitiveness of a gar when close up. It’s not that they haven’t evolved over time, but rather that this group of fish is old. Some experts believe their genus — Lepisosteus — has been around for 100 million years.

The most striking feature of a gar is its “nose.” It’s as if a mad scientist welded a crocodile’s snout to a pipe with scales and fins, and animated it. A gar’s snout is filled with tiny, sharp teeth, but we’ve got nothing to fear from these fish.

A minnow, on the other hand, best remain alert. Gars are stick mimics, loafing languidly in quiet backwaters. They look all the world like floating branches. When small, unsuspecting fish venture near, the “stick” explodes to life and grabs the victim in its toothy maw.

Gar are an important component of stream ecosystems. As apex predators, they play a vital role in regulating populations of other fish species.

A confounding and foolish myth regarding gar is that they decimate sportfish populations (they don’t). This misinformation is perpetuated by some fishermen, and stories abound of pole-wielding bait jockeys hooking gar, snapping their snouts and tossing them onto the bank to perish.

Here is the first sentence from the longnose gar account in the new book, “A Naturalist’s Guide to the Fishes of Ohio,” authored by the aforementioned Rice along with Brian Zimmerman. “Perhaps no other North American fish has been universally maligned and persecuted to the extent that the longnose gar has.”

Longnose gar are one of the most interesting of our fish, and they play an invaluable role in the ecology of our streams and lakes. Just because they aren’t tasty walleye or smallmouth bass doesn’t make gar any less deserving of plying their trade in our waters 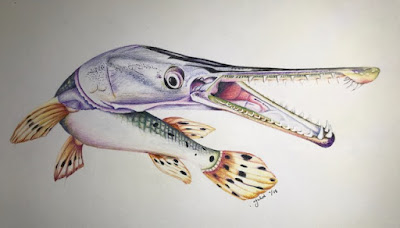