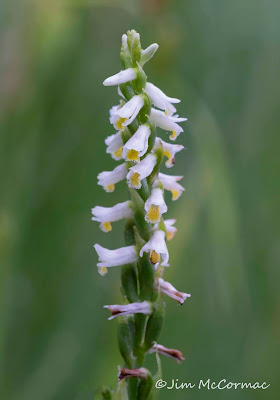 When one thinks orchids, thoughts might turn to tropical haunts: Costa Rican jungles, Amazonian rainforests, or other warm, steamy places. Such thinking would be correct. The orchid family reaches peak diversity in equatorial regions.

Many Ohioans probably get their major orchid immersion at plant conservatories such as Franklin Park Conservatory or the Cleveland Botanical Garden. These places have regular orchid displays, and the diversity of gorgeous plants, many of which are hybrids, is staggering.

But one need not venture to conservatories or jungles for a taste of the world’s second largest flowering plant family (the sunflower family is #1). Ohio has 46 native orchid species. While a tiny fraction of the family’s 20,000 species, our suite of orchids are a wonderful microcosm of the wonders of this group.

Among our most interesting orchids are the lady’s-tresses in the genus Spiranthes. There are ten Ohio species (or more, depending on how you draw species lines). For the most part, lady’s-tresses are short in stature, often less than eight inches in height.

Just prior to a recent trip to northeast Ohio, I learned of a population of shining lady’s-tresses (Spiranthes lucida) in Cleveland. This is a rare plant in Ohio, with perhaps a dozen or so known sites. After an earlier than planned departure and a minor detour, I found myself ogling the little beauties. They grew within sight of downtown’s skyscrapers.

The site was hardly pristine. Lady’s-tresses need regular disturbance, and often occur in what would appear to be ordinary, if not weedy, places. These orchids were in a reverting lawn in a park along Lake Erie. Following cessation of mowing, the orchids have begun to prosper. Proper mowing protocol will help ensure their continuation.

Shortly after that trip, I received a text from Cheryl Erwin of Bellefontaine. The attached photo was of a shining lady’s-tresses! Orchid lightning had struck twice in quick succession.

Chery’s find was in a wonderful 450-acre park known as Myeerah Nature Preserve owned by the City of Bellefontaine. She initially found four plants. Cheryl tipped biologist Dr. Eric Juterbock at the Ohio State University, Lima Campus, and together they found yet more. Eventually about 15 plants were located. That’s probably about typical for an Ohio population.

Park management was interested in the orchids, and worked with Erwin and Juterbock to implement tweaks in the mowing agenda to better conserve the plants. Kudos to Jeff Hyer, Myeerah site manager, for his efforts to work with these orchids.

I made it over to Myeerah on June 13 to get yet another dose of Spiranthes lucida. Lying in the rain on the soggy soil to photograph them, I could better appreciate their beauty. To me, the flowers of lady’s-tresses are slightly granular and look as if they were made of confectioner’s sugar. Unique among Ohio species, the shining lady’s-tresses has a bright lemony-yellow flower lip. This makes it, in my opinion, the showiest of our species.

Much of what accounts for the orchid’s scarcity probably lies under ground. Orchids are notorious for their fine-tuned relationship with subterranean fungi. Grossly simplified, the fungus attaches to the orchid’s roots, and helps nourish the plant. Apparently appropriate fungi is often highly localized, thus too are the orchids.

Thanks to the management of Myeerah Nature Preserve for working with this obscure but beautiful little plant. Parks should, in my opinion, strike a balance between managing for biodiversity and accommodating human recreation. They’ve done that here.

Please talk about the mowing regime(s) to support Spiranthes.

Nothing complex. They were in the midst of mowing the orchid area at peak flowering. Cheryl got them to hold off until the plants set seed.