I was up in Hardin County, Ohio yesterday, seeking an unusual orchid. Success on that, and perhaps I'll write about it later. Especially as we found dozens of a cool moth pollinating the flowers, and pollinators in this orchid are not well known.

While at lunch in Kenton, it dawned on me that the absolute headwaters of the mighty Scioto River were only about 15 minutes northwest of town. While I had seen the Scioto in this area before, I had never made photos of its origins.

The Scioto River is the longest stream totally within Ohio's borders. At 231 miles in length, it covers a lot of ground and touches a lot of lives. On a busy workday (at least pre-Covid) countless thousands of people at least view the river during their daily activities. Following are a few photos of this stream, from beginning to end. Prior to European settlement the Scioto River drainage (main stem and its numerous tributaries) was undoubtedly the most biodiverse river system in what is now Ohio. Even today, despite the environmental ravages, mainly agricultural in nature, this stream system is probably still the most diverse in regards to its fauna. 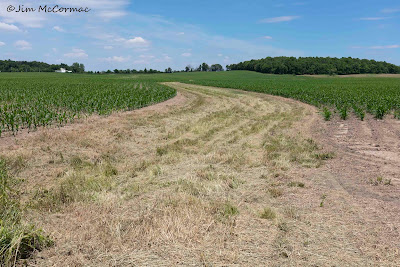 This field is where the Scioto River has its genesis. The mowed grass waterway, surrounded by corn, is the very beginning of the river. That distant tree line marks the absolute start of waters entering the system; waters that will eventually flow into the Ohio River at Portsmouth, travel downstream to Cairo, Illinois, merge with the Mississippi River and ultimately cascade into the Gulf of Mexico near New Orleans in Louisiana. 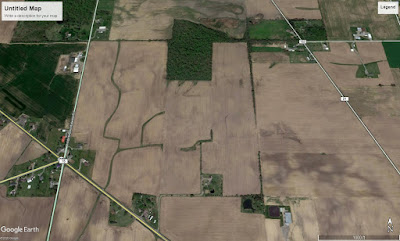 Here's a Google Earth view of the scene in the first photo. The diagonal yellow line in the bottom lefthand corner is the road where I made the image from. The Scioto River headwaters are those green lines running north from there through the brown field. The pale bluish line going north-south almost to the left edge of the photo is the Auglaize-Hardin county line, with Auglaize County to the west.

I have seen sources that claim that the Scioto River has its absolute beginnings in Auglaize County. As close as the county line is, it may be that during heavy rains some water enters the system from across the county line. But near as I could tell, on the ground, the river as a discernable entity begins right here. 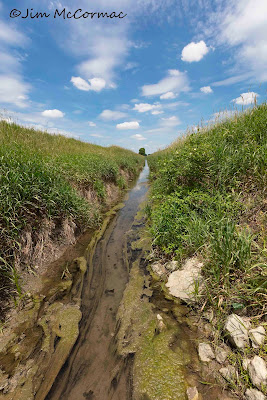 This scene is almost exactly one mile downstream of the first photo. Not far upstream from here is where water begins to consistently remain in the stream. I had been by here a few times in the past, and this is why I someday wanted to return to photo-document the stream at this point.

It's ugly. Agricultural drainage efforts have turned our (arguably) most majestic stream system that exclusively belongs to the Buckeye State into a steep-sided drainage ditch. Note the algae, a legacy of massive phosphorous input from surrounding ag fields.

I sometimes wonder what our streams and water quality would be like today if our ancestors had had more foresight about land use practices that benefit everyone. What if, at statehood in 1803, our first governor, Edward Tiffin, declared that no one could plow, develop or otherwise alter the land within 75 feet of a stream of any size? My hunch is our water quality would be vastly better than it is today. Everyone lives downstream, and all people would be the beneficiaries. 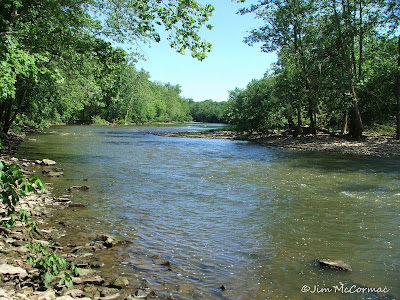 This is the Scioto River at Kiwanis Park, on the north side of Columbus. Here one can find a vision of what the river probably looked like pre-settlement. This stretch is sandwiched between the only big dams on the river, O'Shaughnessy Dam to the north, and Griggs Dam to the south. They impound two large reservoirs which obliterated some of the Scioto River's most interesting topography. This stream section abounds in interesting aquatic animal life, and is a favored birding locale. 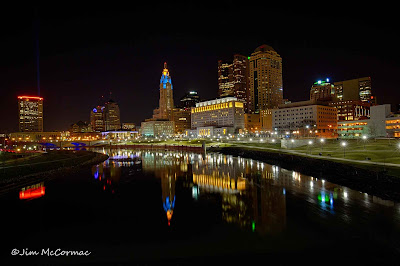 The lights of downtown Columbus skyscrapers reflect on the still waters of the Scioto, which is a centerpiece of Ohio's capital city. Water here is pooled by another dam, Green Lawn Dam, which is far smaller than the two behemoths mentioned in the previous caption.

From Green Lawn Dam all the way downstream to the Ohio River, the Scioto River is free-flowing - no other dams impede it. 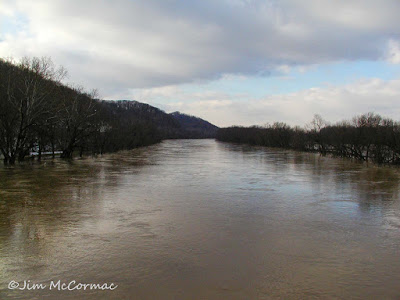 I took this photo from the Higby Road Bridge in southern Ross County - not too far south of Chillicothe. That city was Ohio's first capital (1803-1810) and in a repeat performance, our third capital from 1812-1816. This is where the Scioto River enters Ohio's hilly unglaciated country - a far cry from the glaciated flatlands of points north.

This photo was made during a heavy flood event, and the river is swollen out of its banks. The southern reaches of the river, especially, are notable for regular flooding events. But northerly portions of the stream are certainly not exempt from high water. The famous flood of 1913 laid waste to much of downtown Columbus and took many lives. 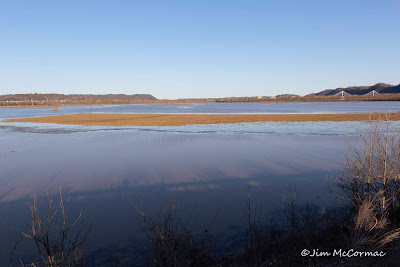 Finally, our Cliff Notes ride down the river comes to its terminus at Portsmouth. These are the massive bottomlands at the confluence of the Scioto and Ohio rivers. Portsmouth lies at the base of the distant hills in the left of the photo, and the bridge far off to the right crosses the Ohio River and the hills of Kentucky lie beyond.

Most springs, anywhere from late February into April, this area floods on an epic scale. The effect is of a large lake and sometimes the water gets high enough to flood surrounding roads. As the flooding coincides with peak northward waterfowl migration, the numbers and diversity of ducks can be staggering. I have seen nearly every regular species of duck - divers and dabblers - in a single day, and many of those species in huge numbers. Scads of truly wild migratory Canada geese, too.

It would be amazing if someday wildlife refuges could bookend Ohio's longest river: the genesis, and terminus. The Scioto headwaters in Hardin County flow from a 16,000 acre region once known as the Scioto Marsh. Just like the area in the above photo, the Scioto Marsh must have been incredible for fowl and other wildlife before it was destroyed.

Nature can be forgiving, and we have learned repeatedly that restoring former wetlands, prairies and river corridors quickly bears fruit.
at June 19, 2020

Great post, Jim. I love to find headwaters of creeks and rivers, too. One thing, though. Having been to Venice, LA, after Hurricane Katrina, the mighty Mississippi oozes into the Gulf rather than cascades. When I stepped out of our vehicle, the "ground" literally squished below our feet. With all of the debris and abandoned boats, it was both eerie and surreal. All the best.

You photos of the headwaters are a sad commentary on current agricultural practices. An acquaintance who worked for the Department of Agriculture frequently said "Farmers were the first conservationists" - hogwash, just look at waterways in almost any agricultural area.