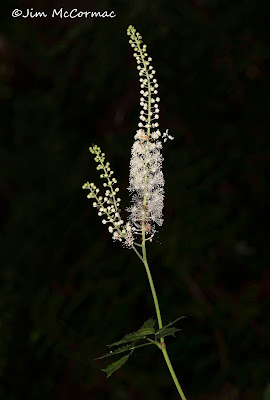 A can't miss plant of late June and early July, the black cohosh, Actaea racemosa. This robust member of the buttercup family (Ranunculaceae) grows in the shady understory of rich woods, and were it a lesser plant it'd be easy to miss. However, black cohosh towers up to six feet, or even taller, and the luminescent spikes of white flowers make it stick out like a sore thumb.

I ran across a vigorous colony yesterday on a steep slope in a Hocking County woods, which instantly caused a lepidopteran red flag to fly. There is a very cool - amazing, really - relationship between this plant, a little butterfly known as the Appalachian azure, Celastrina neglectamajor, and ants. The only host plant for this azure is black cohosh, and with a bit of knowledge one can often find the caterpillars.

The search window is narrow, as the cats primarily eat only the flower buds and then the flowers. The two little racemes to the left in the photo above, and the upper half of the larger raceme, are still in the bud stage. They'll quickly develop into flowers, at which stage the caterpillars will be pretty well grown. So, the azure caterpillar hunter will do best to look for black cohosh still in bud, and then watch for ants swarming a localized area of the budded out flower raceme. 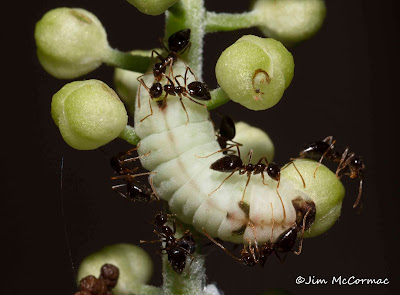 And presto! A caterpillar! It didn't take too long to drum up a few, but out of perhaps two dozen plants checked, only three produced caterpillars. That seems about par for the course. The caterpillars' coloration mirrors that of the buds and stem, and were it not for the ants they'd be incredibly difficult to locate. Not only do these caterpillars prefer cohosh flower buds, they are even finickier. They're only interested in the innards of the bud, and the cat in the photo has its head (to the right) buried inside a flower bud. The flower bud immediately above it is cored out, leaving the tell-tale feeding hole of these larvae. Later, as the buds evolve to flowers the caterpillars will switch to those, and apparently if hard pressed will also consume foliage. I think this caterpillar is in one of its last instars - near fully mature - and if you scroll back to the first photo and look at the overall plant, you'll get an idea as to how small they are.

So, the million dollar question: Why the ants?

Their presence is part of a fantastic relationship between caterpillars (and other organisms such as aphids) and ants known as myrmecophily. This is especially common with gossamer-winged butterflies or Lycaenids, a very large family with some 6,000 species currently known. Basically, the ants involved in myrmecophic relationships "farm" their subjects, and in return are rewarded with highly desirable "honeydew".

The ants (I think a number of species may be involved and I don't know the identity of those in the photo) tend the azure caterpillar closely. They are essentially the cat's private security force, warding off attacks by parasitoid wasps, flies, and other would-be predators. In return, the caterpillar secretes nutritious "honeydew", a liquid excreted by the larvae. This stuff is clearly quite valuable to the ants, as they not only do not let the cat out of their sight, they often remain atop it. In my photo, seven ants are in the photo. No bad guys are breaking through these bodyguards.

So, if you run across black cohosh in flower, take a closer look for a squadron of ants swarming around the buds and flowers. Closer inspection may reveal one of these interesting caterpillars.

Wow, Jim! This is so well written. Fascinating and informative. Part of the drama in my little patch of ground is the much more familiar myrmecophic relationship with aphids. In my case, it was on my new muscadine grape arbor in Georgia. I too can thank the ants though because they alert me to the presence of otherwise nearly invisible aphids supping on the sap in the tendrils and new leaves. I noticed this mutualism in my little collection of native persimmons I just planted this year too.

Incidentally, I found a large colony of blooming black cohosh on Kennesaw Mountain on May 20 this year. Welcome to life in the South. My grandmother was half Eastern Band Cherokee. She and my mother taught me much of the larder and apothecary of the Appalachians. The Cherokee had many uses for this plant and passed on that knowledge to the white settlers. That may be why this plant has so many common names. The more useful and widely distributed plants often do.