I've been a lot of places the last three days, and have seen and photographed many cool things. Capped the weekend with a day at the fabulous Magee Marsh Wildlife Area on Lake Erie, where I and the scads of other people saw scores of birds. More to follow on that, hopefully.
On the way back from Lake Erie, I made a little circuit of prairies, all very different from one another. A few photos follow... 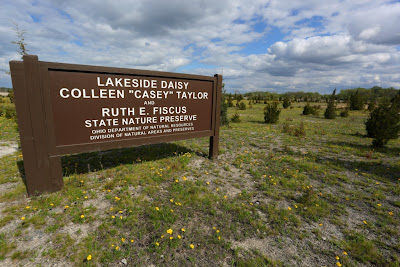 The 19-acre Lakeside Daisy State Nature Preserve is a must-see site for anyone who enjoys nature. Right now is the time to stop, when the preserve's namesake is in peak  bloom. 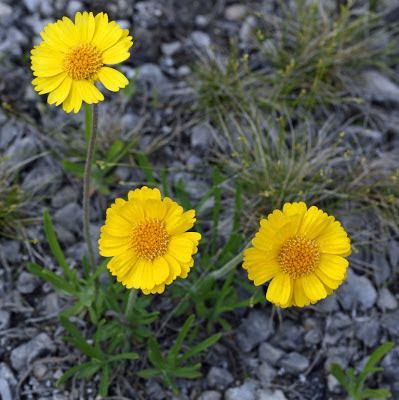 Lakeside Daisy, Tetraneuris herbacea, is listed as federally threatened and is one of the rarest plants in the United States. One wouldn't think it so rare if they visited the nature preserve now, when the limestone barrens are colored golden with thousands of flowers. Excepting a small Michigan site, Ohio's Marblehead Peninsula hosts the only U.S. population. 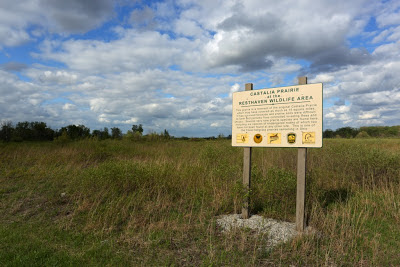 As the sign says, one of the best remaining prairies in Ohio - and there are precious few - is the Castalia Prairie, which is protected by the Ohio Division of Wildlife as the Resthaven Wildlife Area. 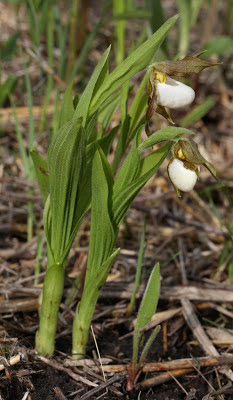 I found it necessary to stop today, to see this tiny orchid. The White Lady's-slipper, Cypripedium candidum, grows only in two locales in the state, and by far the largest occurs in the Castalia Prairie. This gem stands only eight inches tall. The orchid is fire-dependent. Following the next controlled burn, perhaps next year, the orchids will burst forth in staggering numbers. 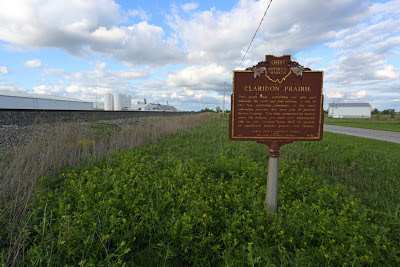 Finally, I couldn't drive by the Claridon Prairie, which is not far east of Marion, without a stop. It's a bit early for much to be happening in this shard of tallgrass prairie, but I knew there would be one notable plant that'd be looking good. 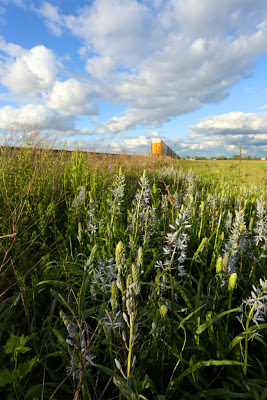 An eastbound freight train rolls down the tracks, leaving a trail of sky-blue Wild Hyacinth, Camassia scilloides, in its wake. The railroad, which was laid out long ago, is responsible for the preservation of this prairie. It's verges, at least for this mile long sliver, are virgin prairie soil with its complement of special prairie plants. 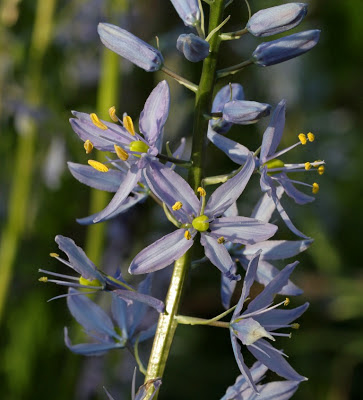 Wild Hyacinth commonly grows along streams on rich wooded terraces, but it can also flourish under big skies in moist prairies. It looks right at home in the Claridon Prairie.
at May 12, 2013

Definitely a great flower weekend! We visited the spectacular population of Wild Hyacinth at Stratford today, growing in the woods, so it was interesting to see your photo and description of them in full sun.

I stopped by the Lakeside Daisy State Nature Preserve yesterday too! Have you seen the Lakeside Daisy Garden on the lakefront footpath at Lakeside? I just blogged about taking my mother for Mother's Day brunch at Lakeside, where we spotted Red-Winged Blackbirds and plenty of my favorite Virginia Bluebells too. I love that place!

Great post, Jim! I'm heading up that way this weekend to see the lakeside daisies and also head to Resthaven to see the small white ladies. I know the Andrew's lady slipper hybrid occurs there and hope to hunt it out; that's a huge lifer for this orchid nut :)

I loved your picture of the hyacinth with the train behind it. And I'm dying to check out the White Lady's Slipper Orchid at Resthaven. Thanks for the great post/pictures!

Thank you all for your comments! Good luck finding the hybrid slipper, Andrew. I actually saw it there years ago. Word was that some of those nutty orchid collectors found out about them and dug them. Rare orchid locations are usually best kept under one's hat! Recognizing that I just posted about a rare orchid, but one whose locale was already widely known...