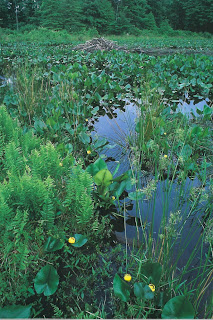 The beautiful image above, made by Gary Meszaros, is of a place known as Morgan Swamp and was featured in the book that Gary and I collaborated on: Wild Ohio: The Best of Our Natural Heritage. That photo-filled volume covers 40 of Ohio's wildest areas, and Morgan Swamp was a no-brainer for inclusion. Located in the wildlands of Ashtabula County in northeastern Ohio, Morgan Swamp is large and difficult to access potpourri of beaver swamps, alder thickets, and various types of woodland.

Here's a quote from my text: "Morgan Swamp is for the intrepid. The vast, flat terrain pocked with soupy wetlands and tangled vegetation doesn't lend itself to easy navigation, and a compass is required. The effort pays off, though - rare plants hard to find elsewhere in Ohio grow on elevated hummocks and in boggy quagmires. At least 15 state-listed plants have so far been found, and other discoveries await". 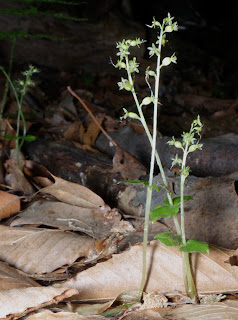 The spindly stalks of an orchid not seen in Ohio since 1933 jut from the leaf litter of a hummock in Morgan Swamp. It is Heart-leaved Twayblade, Listera cordata, and it must have been a thrill to stumble into this plant - sort of like seeing a botanical ghost. Until John Pogacnik's rediscovery of last Sunday, May 26, this species had a big fat X as its status: Extirpated, or locally extinct. John is an extraordinary field biologist, and has a long string of noteworthy discoveries - plants and animals - to his credit. But he'll have a hard topping this orchid find anytime soon. 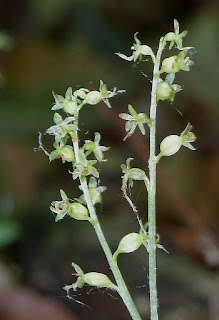 Heart-leaved Twayblade is not our showiest orchid - that honor might fall to the Showy Lady's-slipper, Cypripedium reginae. In fact, one author described its flowers as looking "mosquito-like". Nonetheless, it has a certain charm and charisma that only orchids can muster.

Without a splitting of hairs, we'll say that 46 species of native orchids have been found in Ohio (there is one established nonnative, believe it or not). Of that number, fully 26 species (including one variety) are listed at some level of imperilment (57% of our orchid flora), as follows: Endangered = 7; Threatened = 6; Potentially Threatened = 8; and Extirpated = 5. Of course, we can scrub one from the X list; presumably the Heart-leaved Twayblade will later be redesignated as Endangered. 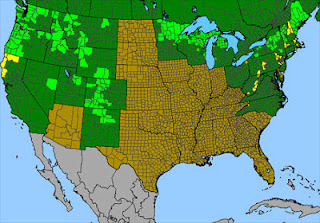 This map shows most of the big picture of the Heart-leaved Twayblade's range. It occurs commonly far north into Canada, too; this map only shows U.S. records. As we can see, the Ashtabula County, Ohio record - based on the previously mentioned 1933 collection - is somewhat far afield and definitely at the periphery of this orchid's range.

Congratulations to John Pogacnik for a fabulous discovery, and putting a plant thought to be long lost from Ohio back on the map. Major thanks are also very much in order for the Ohio Chapter of The Nature Conservancy, which began acquiring land in Morgan Swamp long ago and now protects about 1,400 acres in the area. 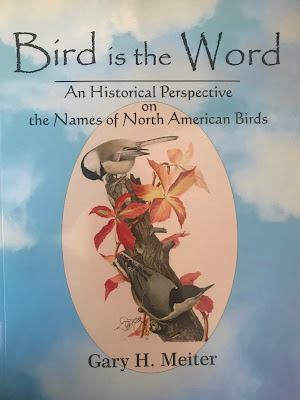