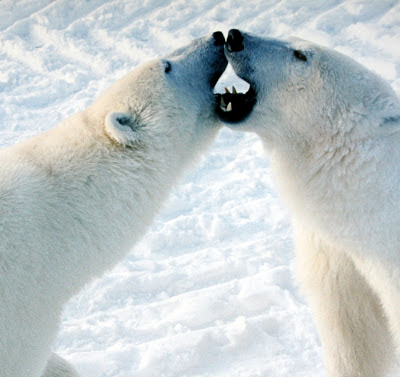 A pair of Polar Bears, Ursus maritimus, engage in a bit of mock sparring at the Polar Bear Capital of the World, Churchill, Manitoba.

Polar Bears are perhaps the most iconic mammal of the Arctic, and warming temperatures are threatening their existence. The man who knows as much as anyone about the giant white bear, and who led the charge to have this species listed as an officially declared "threatened species" by the U.S. Department of Interior, is Dr. Steven Amstrup.

Amstrup is Chief Scientist of Polar Bears International, and he'll be in Columbus on Tuesday, May 14 to give a fascinating presentation about polar bears. This lecture is part of a monthly series of talks put on by the Environmental Professionals Network. The breakfast presentation takes place from 7:15 - 9:20 am at the Nationwide and Ohio Farm Bureau 4-H Center on the Ohio State University Campus.

For details and registration, GO HERE.