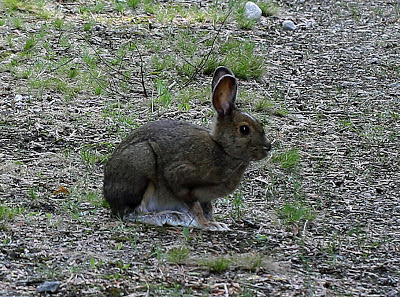 A Snowshoe Hare, Lepus americanus, regards your narrator, possibly with a mix of curiosity and distrust. I encountered this bunny yesterday while exploring a remote area of the Lake Huron shoreline, in Michigan's Presque Isle County. I was by myself, and my primary goal was to photograph various boreal plants, and elfin butterflies. Thus, and perhaps foolishly, I had only the 100 mm macro lens bolted to the Canon - traveling light. So, when I rounded a corner and saw the hare far ahead, I thought my chances of photographing the animal were slim to none. One has to be within 20 feet or so to manage a workable image with that lens.

So, I did my best to commune with the rabbit. Telegraphing pleasant thoughts in its direction, I began indian-stepping his way: back corner of the heel down, then slowly lower the rest of the foot. Little to no footfall noise. I had about 100 feet to get within range. Remarkably, the bunny sat tight and allowed me to get within 20 feet.

Note its large ears, a trademark of the hares. He has molted from a winter coat of white into the brown summer pelage, although the animal retains white feet and flanks. Because of the seasonal change of color, some people call Snowshoe Hares the "Varying Hare". 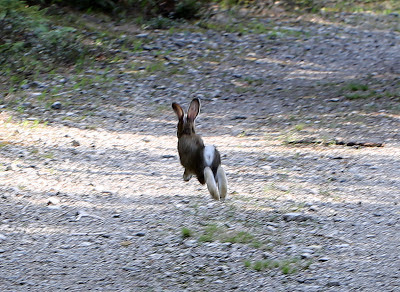 Finally, the hare had enough of me, and in the blink of an eye bolted for the cover of dense White Cedar. Fortunately, I had my camera at the ready and set to burst mode, and held down the trigger as the animal hotfooted it for cover. When a hare takes off, it's as if it has been shot from a cannon. Within a second or two he had made it to cover and vanished. Such speed and agility serves them well when trying to avoid Coyotes, which are a common predator.

Check the size of those feet! Snowshoe Hares are named for their enormous hoppers, which allow them to move about easily on the surface of snow. 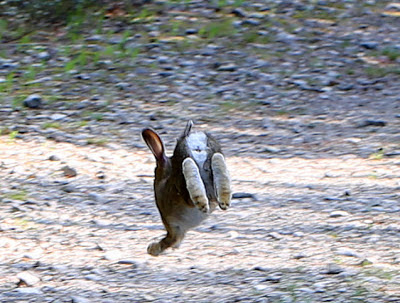 Hares have an amazing, thoroughly impressive bounding gait, and when at full tilt can reach nearly 30 mph. It was a treat to have such an encounter, and that the animal would be so cooperative with me.

Snowshoes have a huge distribution, ranging across northern North America from Newfoundland to Alaska. They are shrinking back from the southern edges of their range, and the northern lower peninsula of Michigan - where I made these images - is about at their southern limits these days. The locals report that they were once more common and widespread in this part of Michigan, but are becoming harder to find.
at May 20, 2013

Such a treat to see them. I got a glimpse of a fleeing snowshoe in West Virginia (Dolly Sods) where altitude compensates for latitude on the range map. Then finally a longer view of one at Long Lake NWR in North Dakota last June. Still don't have a winter sighting on my list.

Love this. Thanks for sharing. I've haven't yet seen one during our annual travels to the UP