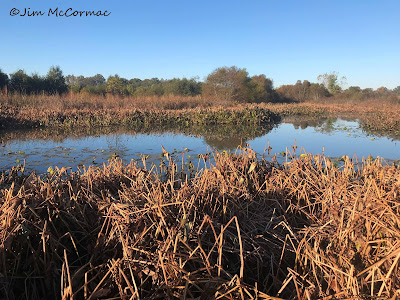 A wonderful mixed-emergent marsh restoration, known as the Dutch Fork Wetlands. It's part of Dawes Arboretum, a sprawling 2,000-acre palette of wildly diverse flora. Part of the arboretum is formal plantings comprised of numerous ornamental plants, many from distant lands. But a bigger part of the property is native plants in more or less natural landscapes, and arboretum staff work hard to properly manage the indigenous assets.

I was over at Dawes about a week ago for a meeting, and arrived early - the crack of dawn to be precise. Mid-October is peak for migrant sparrows, and I figured the Dutch Fork Wetlands and its associated meadows would produce lots of the little brown jobs. I was not disappointed. 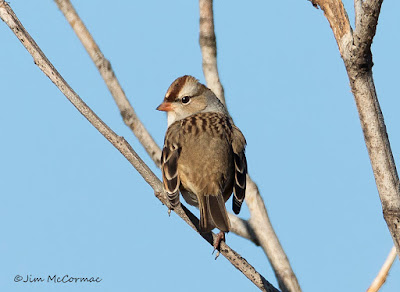 A juvenile white-crowned sparrow surveys his temporary domain from a sapling. I saw many of these big sparrows, and several were singing their haunting minor-keyed whistles. White-crowns are strictly migrants here. They breed in the FAR north; the sub-tundra taiga and on north into the true tundra, and in the higher elevations of the Rocky Mountains in the west. 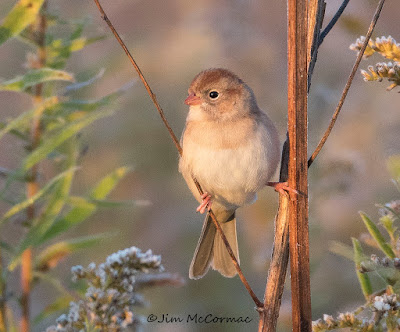 Many field sparrows were present. This species is quite the contrast to the previous one in terms of bulk. A good measure of "bulkiness" in a bird is weight. The white-crowned sparrow weighs about 30 grams. A well-fed field sparrow, about 13 grams. Only the chipping and clay-colored sparrows are ever so slightly smaller.

This field sparrow is perched on a cup-plant, Silphium perfoliatum. Most of the sparrows present this day were smitten with this robust native member of the sunflower family. I quickly learned to spot the cup-plant colonies from afar, creep up, and be rewarded with gangs of sparrows stripping the fruit. 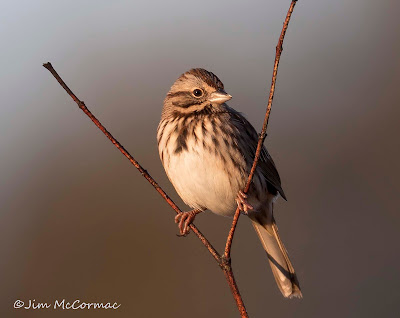 As is to be expected nearly anywhere in Ohio, song sparrows were frequent. Given the numbers that I saw, I suspect local breeders were augmented by migrants.

Beginning birders often lament the alleged difficulty of sparrow identification. But there aren't that many - 15 commonly occurring Ohio species - and most are quite distinctive. As with learning to identify any group of organisms, become very familiar with the common species such as this song sparrow, then the others will start to stand out as different. 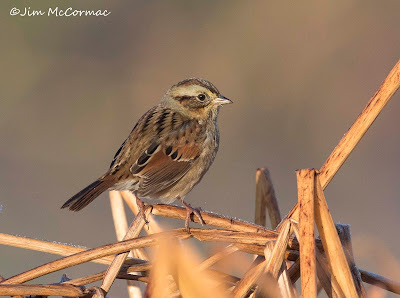 We have three North American species of sparrows in the genus Melospiza, and I saw them all this day. The aforementioned song sparrow is one, and so is this swamp sparrow, distinctive in its chestnut hues. It's well-named - swamp sparrows are very much birds of wetland habitats. This one perches on a senescent snarl of soft-stemmed bulrush, Schoenoplectus tabernaemontani. I probably saw or heard several dozen in the Dutch Fork Wetlands. Prior to the arboretum's wetland restoration work, there were probably none. 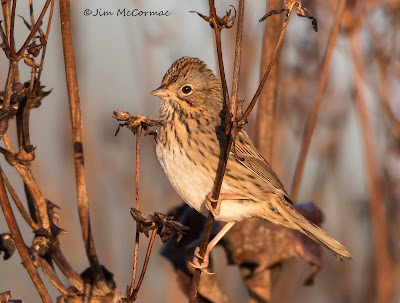 This normally shy skulker was the best of the Melospiza sparrows, if one feels obligated to rank such things. It is a Lincoln's sparrow, named for 21 year old Thomas Lincoln, who accompanied John James Audubon on his 1833 expedition to Labrador. Young Lincoln bagged the first specimen of this sparrow, and Audubon named it for him.

I see plenty of breeding Lincoln's sparrows every year on their breeding grounds in northern Michigan and usually elsewhere in the North Country. There, they come out of their shell and often sing their beautiful melodies from open perches. I have never heard one sing down here in migration, and they typically sneak about furtively in dense tangles of vegetation near the ground.

Thus, I was pleased to hear the call notes of several Lincoln's sparrows soon after arriving, and found about ten of them in all. This one - and several of the others - were feasting on cup-plant seeds.

In total, I located nine species of sparrows on this day (others included chipping sparrow, eastern towhee, Savannah sparrow, and white-throated sparrow). Missed were my hoped for primary targets, the Le Conte's and Nelson's sparrows. Dutch Fork Wetlands in fall should be a great place to turn up one or both of these rarish wetland species. 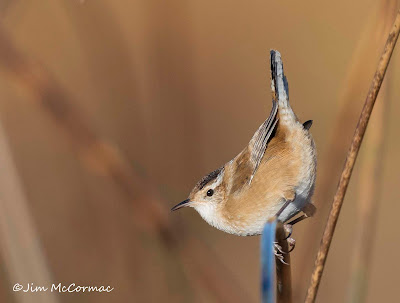 Of course, not all was sparrows on this foray, and this nosy marsh wren amused me for several minutes. I was standing quietly and somewhat concealed, when the wren burst from a snarl of cattails and curiously investigated me from all angles. Marsh wrens are quite photogenic, if you are lucky enough to have clear shots at them. 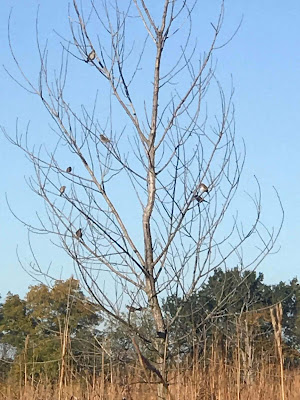 Finally, it was time to head for my meeting, but this birdiferous sapling held me up briefly. For some reason, about every songbird in the Indian grass meadow wanted to use it as a lookout. In its branches, and I'm sure I'm forgetting one or a few species, were eastern bluebird, American goldfinch, house finch, palm warbler, and song, swamp, Savannah, Lincoln’s, and white-crowned sparrows, most of them simultaneously (sorry for the poor iPhone photo - I was over-lensed in terms of capturing the entire tree with a real camera).

Know the area well,live close by. Walk there 3-5 times a weeks. The cell tower to the NE,off Dawes property had nesting ospreys this summer. The marsh to the SE had pair of adult bald eagles several times late spring,but no nest found. That happened shortly after the nest along the river at 70 and 79 blew down. Sandhills,sora,am bittern were seen several times early.Saw two broods of hooded mergansers about a month apart,second one was coming out of wood duck box. Rick SE licking co