Nature: Golden fly a beauty, not some biting pest 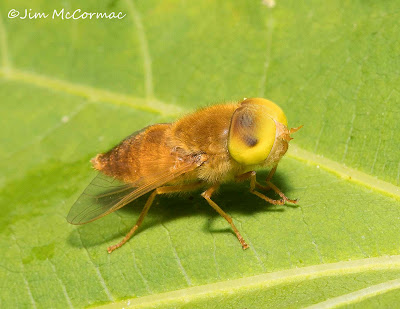 An Atylotus bicolor fly, dubbed a "golden velveteen fly" after a recent sighting by explorers at Mentor Marsh near Cleveland/Jim McCormac

Say the word “fly” to someone and you likely will get a negative reaction. There are legitimate reasons for this. Tsetse and bot flies, pesky houseflies and savagely biting horseflies contribute to the bad rap. We will circle back to those horseflies in a bit.

Tarnishing the name of this astonishingly diverse group of insects because of the transgressions of a few bad actors is hardly fair. To date, more than 125,000 species in the Order Diptera (flies) have been described. Entomologists think that there could be more than 1 million species worldwide.

Most flies pose no problems to people, and they operate out of sight and mind. They are ubiquitous in nearly all habitats and are an integral part of the natural world. Flies pollinate myriad flowers, serve as food for higher-end predators, and keep other animals in check by predation. Overall, we know little of the roles played by the actors in this massive order of insects.Back on Sept. 15, I wrote about Mentor Marsh near Cleveland and the transformative restoration work there. Staff members of the Cleveland Museum of Natural History’s Natural Areas Program have directed the removal of about 800 acres of invasive reed grass (Phragmites australis).

Native flora, no longer suppressed by reed grass, has returned with a vengeance. The proliferation of plants has ushered in a major spike in animal diversity.

On my tour of the marsh on Aug. 13, guided by Cleveland museum employees Becky Donaldson and Ben Piazza, I saw abundant evidence of the spike in animal populations. Bald eagles, Caspian terns, Virginia rails and several dozen other bird species were detected.

Interesting moths and butterflies flitted about, a coyote trotted across our path and gorgeous banded garden spiders awaited prey in their complex webs. However, it was a fly that won the day in terms of uniqueness, at least in our book.

At one point, a shout went up from Piazza — he had spotted a bizarre golden fly resting on a swamp rose-mallow leaf. We rushed over to investigate, and were rewarded with a stunning half-inch-long work of six-legged art.

The fly was elegantly clad in velvety golden hairs, and its enormous, multifaceted goggle eyes seemed disproportionately large. Even the wings were tinted in gold. The fly seemed imported from a Dr. Seuss tale; an entomological Lorax come to life.

Later, we determined the mystery fly was Atylotus bicolor, a member of the horsefly family. The gorgeous fly apparently lacks a common name, so we informally dubbed it the “golden velveteen fly.” Unlike other members of its tribe, this one doesn’t seem to be a biter, and I had to chase it a bit to obtain photos.

As showy as Atylotus bicolor is, we figured there would be much information available. However, we ran into an informational brick wall. Apparently the insect is very rare, at least in the U.S., and we have found only one other modern record, near Utica, New York. Most records are north of Lake Erie in southern Ontario and scattered Canadian locales, but even there it doesn’t seem frequent.

We later found out that another Cleveland museum employee, Grai Oleksy, had documented this fly in Mentor Marsh last year. As far as we know, that’s the first Ohio record.

As striking as the golden velveteen fly is, there surely would be other records if it were frequent and widespread. From our research, it appears nearly nothing is known of its life cycle, other than that the larvae occupy damp leaf litter.

One might ask “What good is the golden velveteen fly?” I would answer with a quote from famed conservationist Aldo Leopold: “To keep every cog and wheel is the first precaution of intelligent tinkering.”