Time to throw the birds back in Ohio Birds and Biodiversity! I needed some solo bird therapy this morning, having had precious little time to observe and photograph the feathered crowd this fall. So it was off to a tried and true local hotspot, Battelle Darby Metro Park and its huge and successful prairie restoration. This place never lets me down, and it didn't today. 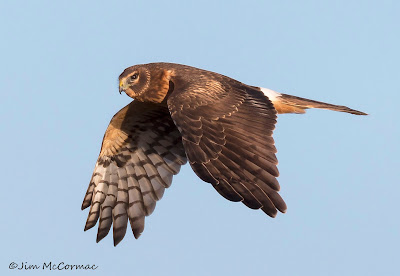 A female northern harrier wings past, just as she glimpsed me concealed in a natural blind of cattails. Prior to spotting the interloper, she had her head canted downwards, watching for voles. I saw one other female, and a striking gray adult male. Note the hawk's owl-like facial disk. The bright buffy tones mark her as a juvenile. 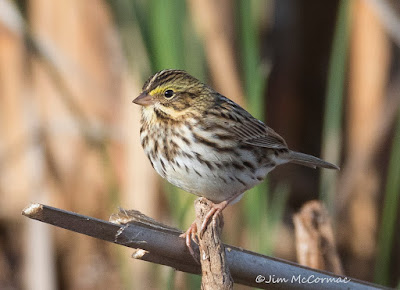 Dapper and sleek, a neatly marked Savannah sparrow pauses briefly atop a snag in a cattail marsh. This sparrow favors open country, but is not named for the plant community of widely scattered trees (which is properly spelled "savanna"). Rather, its common name is derived from the city in Georgia, where pioneer ornithologist Alexander Wilson took the first specimen.

We are at the peak of migration for Savannah sparrows, and I saw perhaps 75 of them this morning. 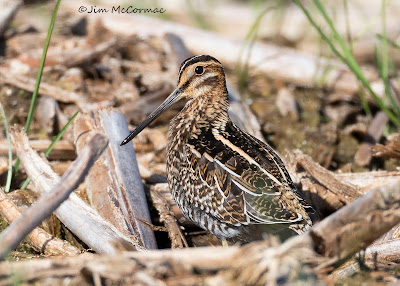 A juvenile Wilson's snipe, its plumage fresh and crisp, blends well with the punky duff of a drawn down cattail marsh. This species blends astonishingly well with its haunts. I first picked up a few snipe as they flew by, then flushed a few others. After settling into a particularly good snipe honey hole and carefully watching, I gained a better estimate of their numbers. I tallied nearly 50, but as I saw only a fragment of the available habitat I'm sure many others were present.

All told, a wonderful three hours afield on a cold clear October morning.