Debbie and I are up in the Upper Peninsula of Michigan, scouting in advance of our photo workshop which begins on Sunday. Nine great people will connect with us in Marquette, and off we'll go to see waterfalls, lighthouses, fall color and lots of other showy highlights.

I left Columbus yesterday bright and early, where it later hit a high of about 92F. Big difference in temps up here, where yesterday's high was 50F. At the tip of Whitefish Point at sunrise this morning, it was a raw 43F with strong winds off Lake Superior and spitting rain. Good photos were made nonetheless. 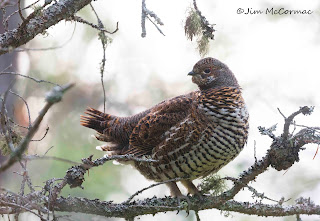 Late yesterday, while driving back a seldom-used sandy lane to Crisp Point Lighthouse, we encountered this hen spruce grouse poking around on the edge of the road. She fluttered up into the low boughs of a nearby spruce, and watched us carefully. The "fool hen" as they are sometimes known, sat tamely and allowed us to make many images. She was still there when we left. Just down the road was a young black bear, but it skittered off before cameras could be activated. 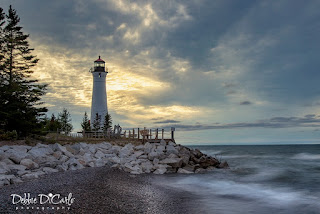 This was our destination, Crisp Point Lighthouse on Lake Superior. Debbie made this beautiful image and kindly allowed me to use it. Haven't yet had a chance to do anything with my images. The colorful sunset we hoped for did not materialize, but it's still an incredibly showy spot and well off the beaten path. On the way out, a snowshoe hare darted across the road.