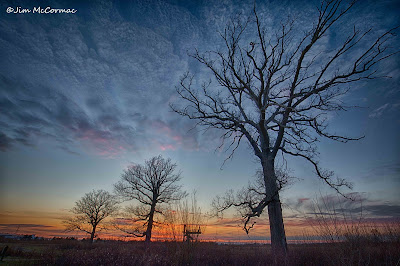 A beautiful sunset forms a colorful palette behind three massive oaks at Glacier Ridge Metro Park in central Ohio. The oaks - all three, I believe - are hybrids between swamp white oak, Quercus bicolor, and bur oak, Q. macrocarpa. Hybridization between various oak species is common, so much so that regularly occurring crosses have been given their own combination name. In this case, it is Quercus x schuettei, Schuette's oak. The hybrid is named in honor of Joachim Henrich Schuette (1821-1908), a German botanist who emigrated to the United States in 1874. His last name is pronounced shoo-tee, so the trees above are "Shoo-tee's oak".

I made this image last night, and was pleased to bear witness to a pair of displaying Wilson's snipe. While snipe court during migration, and these birds may be still headed north, the local wetlands offer good habitat for breeding. Snipe are very rare nesters in Ohio, especially so in the central part of the state, and it would be very noteworthy if these birds remained to nest at Glacier Ridge. 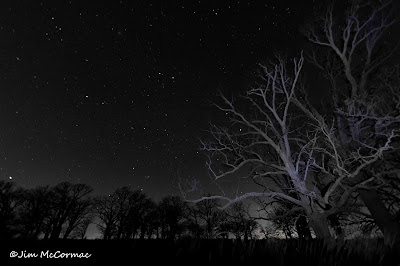 Following the sunset experience above, I headed north to Daughmer Savanna, a relict prairie savanna (not "Savannah"; that's a city in Georgia) in Crawford County. Newly minted Crawford County Parks director Josh Dyer - congrats on the richly deserved post, Josh! - kindly gave me permission to enter the site after dark. I had long wanted to make star photos at this site. The weather prognosticators were calling for clear skies, but as is often the case, they were (somewhat) wrong. By the time I arrived at Daughmer, clouds had rolled in and obscured most stars. I headed out on the path anyway, to enjoy the aural ambience of calling spring peepers, western chorus frogs, wood frogs, and coyotes.

After returning to the car and answering some correspondence, I stepped out for one last look at the heavens. Miraculously, the skies had cleared! I grabbed my gear and went out for photos, including the one above. Click the image to enlarge and see more of the stars. While I love shooting astrophotography, Ohio is just not a great place for it. Light pollution is too pervasive, and even in a somewhat remote place like this lights from distant towns and cities wash the horizon yellow and dim the brilliance of the stars. Nonetheless, I love the setting of the savanna for such shots and saw some perspectives that I would like to shoot during future nocturnal excursions.